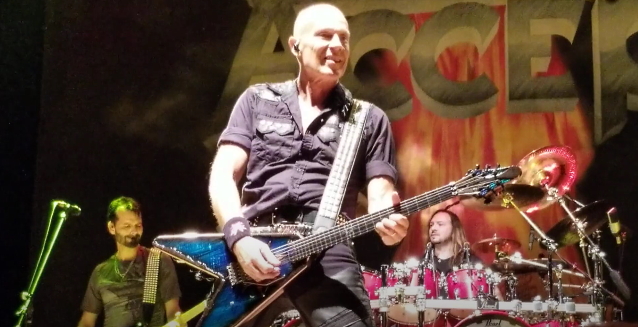 On July 2, German/American metallers ACCEPT played their first pandemic-era concert at Penn's Peak in Jim Thorpe, Pennsylvania as a warm-up for their appearance at the M3 Rock Festival the following day. Due to COVID-19 restrictions, guitarist Uwe Lulis — the only member of ACCEPT who doesn't reside in America — was unable to enter the U.S. and join his bandmates for the gig.

ACCEPT's latest album, "Too Mean To Die", came out in January via Nuclear Blast. The LP is the group's first without bassist Peter Baltes, who exited ACCEPT in November 2018. He has since been replaced by Martin Motnik. ACCEPT's lineup has also been expanded with the addition of a third guitarist, Philip Shouse, who originally filled in for Uwe Lulis during 2019's "Symphonic Terror" tour, before being asked to join the band permanently.

"Too Mean To Die" was recorded in Nashville, Tennessee with British producer Andy Sneap (JUDAS PRIEST, MEGADETH), who has been responsible for the magnificent studio sound of ACCEPT since 2010.

ACCEPT guitarist Wolf Hoffmann recently told France's Loud TV about the "Too Mean To Die" album title: "It's more or less our answer to the whole corona vibe in the land, in the world. Of course, it's not meant serious — we said, 'We're too mean to die. We can't be bothered by any little virus that's out there.' Of course, it's not meant to be totally serious. But it sounded like a metal album, it sounded like a metal title, and we liked it. So we decided to go that route and give the metal fans a fresh and in-your-face sort of statement and a metal album that doesn't really deal with anything corona-related. 'Cause I think people had enough of all the corona stuff by now. It's time to move on."

Regarding ACCEPT's decision to release "Too Mean To Die" during the COVID-19 pandemic, Wolf said: "It's gonna be a while until we can do a proper headlining tour. But we decided to go ahead and release it, because maybe fans will enjoy it now that they're in lockdown, and maybe it's gonna take their mind off everything. And it's better than waiting until who knows when — until we can tour again. So let's have the album out now. Fans can enjoy it and listen to it, and then one day we'll be on tour and we'll meet each other again."


ACCEPT Rockin Penn's Peak - (Restless and Wild) . Thanks for the invite Scotty Black . You da Man ???