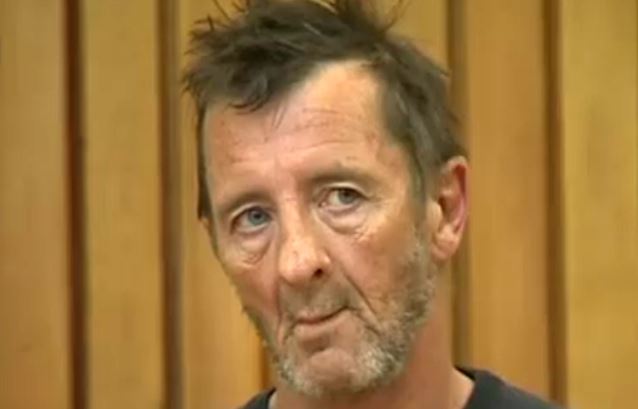 According to 3 News, AC/DC drummer Phil Rudd was placed in handcuffs and put into the back of a police car early Thursday morning (December 4) following an incident outside a coffee shop in a shopping center in Gate Pa, New Zealand.

Leo Rojas, the owner of Columbus Coffee in Tauranga, said he witnessed an altercation between Rudd and a unidentified man at about 10:20 a.m.

"I saw him following a taller, bigger guy and trying to punch the guy," Rojas told NZ Newswire.

Rojas said the man was trying to get away from Rudd, telling the drummer, "Look, I don't want to break your face."

He said the man eventually got tired of Rudd's aggressive behavior and pushed the musician away. "[Rudd] literally fell away like a fly," said Rojas.

A third man, believed to be Rudd's bodyguard, tried to break up the fight between the rocker and the taller man by holding the drummer back.

"That's when Phil started punching and kicking his own bodyguard, which I found funny," said Rojas.

Rudd was taken to court where his lawyer acknowledged that the rocker breached his bail agreement by having contact with complainants and police witnesses named in the police charge sheets in his upcoming trial. The judge set a new bail that called for a new condition in which Rudd is not allowed to consume illegal drugs. Crown solicitor Greg Hollister-Jones said he sought this extra condition because Rudd's behavior had been erratic and it would help to manage his complacence with all his bail conditions.

The musician's lawyer said of the Thursday morning incident: "It was a meeting with somebody he wasn't meant to associate with in a shop. It was a chance meeting and then there was contact from that."

Video footage of Rudd's latest court appearance can be seen on the 3 News web site.

As previously reported, Rudd did not show up in Tauranga District Court in New Zealand on Tuesday morning (December 2) for his second hearing on charges of threatening to kill and possession of methamphetamine and cannabis. According to The New Zealand Herald, a "not guilty" plea to the charges was entered by his lawyer.

Judge Tom Ingram ruled that Rudd's case would likely be heard at a "judge-alone" trial next year, meaning that no jury will be present. A further case review for Rudd will be held at the same court on February 10.

Rudd was arrested in early November on charges of attempting to arrange a murder, threatening to kill and possession of meth and marijuana.

The murder-for-hire charge was dropped quickly but Rudd still faces several years in prison if convicted of the others.

Rudd's problems affected the recording of the new AC/DC album, "Rock Or Bust", as guitarist Angus Young explained. "Getting him there to do the album was quite tough, and his behavior's been a bit strange, you know," he told The Pulse Of Radio. "'Cause when we were doing the album, one minute he was coming, next minute he wasn't coming, so it took quite a while to get him to the studio. I mean, when he got there, he did his great job, but it's not the Phil that we've known all over the years, you know."