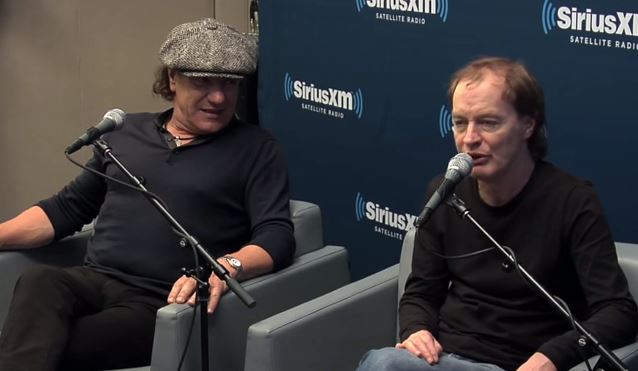 Shaun Keaveny and Steve Lamacq of BBC Radio 6 Music recently conducted an interview with singer Brian Johnson and guitarist Angus Young of AC/DC. You can now listen to part one of the chat at BBC.co.uk.

Speaking about the making of AC/DC's new album, "Rock Or Bust", Angus said: "Four weeks we took [to record the CD], so that was pretty quick. I guess [the length of the process] depends on who you work with. ['Rock Or Bust' producer] Brendan O'Brien is very quick. I think the one before that, 'Black Ice', was about seven weeks; [it took] a bit longer. Basically, it's down to you. If you've got all the songs together and you like what you've got and you feel confident, it's pretty much…. Once you're sitting with somebody, say, like Brendan, he'll get you what you want."

Added Brian: "Seven days a week, [Brendan] kept the adrenaline pumped all the time and he calls everybody by both their names. He never says 'Brian' or 'Angus.' He's, like, 'Angus Young. C'mon! I want you in here now. Let me get that magic from you. What do you got for me? Brian Johnson, downstairs now. Sing, baby, sing.' And it turned out wonderful. We were excited, and I think that's great, 'cause it comes through in songs. If you sing a song twelve times to get it right, you can tell. If you sing a song just a couple of times, like I did, you can tell it's fresh and it's new. And it was the same for Ang, and it was the same for everyone. [Brendan is] wonderful to work with."

Continued Angus: "He keeps everyone moving, so nobody's sitting around, going, 'What am I doing next?' Once we had a track down, he would go, 'Right. I'm gonna take this. I'm going down with Brian.' He'd get Brian up. 'While I am doing that, you guys get this track together and start knocking it out. Know all your bits.' So when he'd come back out, we would more or less [have] the track all in order and ready to go."

AC/DC's 16th studio album, "Rock Or Bust", arrived in stores on Tuesday (December 2), following perhaps the toughest stretch of time in the band's 40-year history since the death of singer Bon Scott in 1980. First, founding guitarist Malcolm Young was forced to retire from the group due to the onset of dementia, with the band recruiting nephew Stevie Young to play in his place. Then drummer Phil Rudd put his own future with the band in doubt, showing up late for the recording sessions, missing a video and photo shoot entirely, and finally being arrested on charges of murder-for-hire, threatening to kill and drug possession. Rudd showed up for a court hearing last week but his status with the band remains unclear.