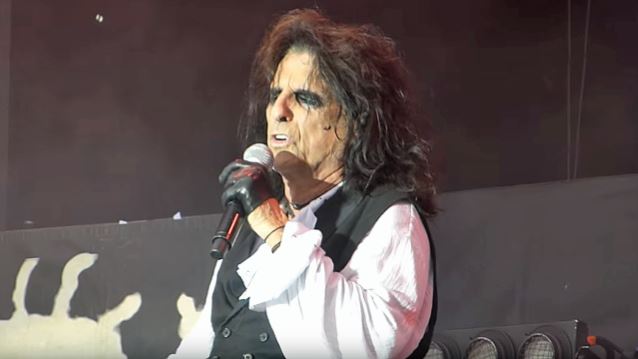 Alice Cooper has not yet decided which candidate to vote for in the U.S. presidential race, explaining that "nobody wants to vote" for either nominee.

The legendary rocker, who previously criticized other rock musicians for wearing their politics on their sleeves, told Rolling Stone that he stood by his 2015 comment that he expected to see the "funniest election of all time" unfold this year. He said: "It's funny in a Kurt Vonnegut kind of way. It's also funny and kind of seriously demented that nobody wants to vote for a candidate; they want to vote against the other candidate. I can't think of anybody that's going, 'I really like Hillary. I'm going to vote for her.' No, it's: 'I'm voting for Hillary 'cause I hate Trump.' Or it's: 'I hate Trump, but I hate her worse.' Nobody's actually for anybody."

Asked for his opinion of Trump, Cooper said: "He's an interesting character. It seems like he shoots himself in the foot every single day and gets more popular by doing it. It's the weirdest. Like I said, it's like Vonnegut: Everything that shouldn't happen is happening. It's the same with her. Every time she gets a little bit ahead, something else comes out that makes her look worse 'til you're sitting there going, 'I honestly have no idea who to vote for this time.'"

He continued: "I honestly cannot in my head look at either candidate and say, 'Oh, yeah. I'm behind that.' So it's weird. I'm going to vote, but it's really going to be one of those last-minute decisions going, 'Ah.' [Pauses] You know, I'm voting for Tom Hanks. I just think he would be a great president."

Cooper told "The Strombo Show" last year that Trump was "not a sayer, he's a doer. I think that's what the American public are looking at. The American public always votes with their wallets. They're looking at a guy and going, 'Why don't we put a billionaire in there that knows how to run a business? Because America is basically a corporation, and that's what they're thinking right now. They don't want some vanilla politician in there anymore doing business for us that's milk toast. They want a guy that is going to do something. I don't know how much he knows about foreign policy and that's what worries me, and I think [it worries] a lot of people."