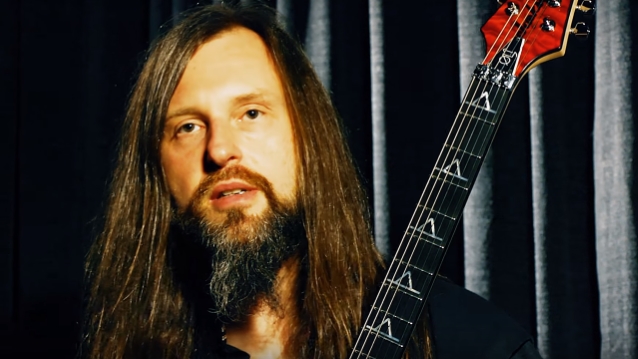 Oli Herbert, guitarist of Massachusetts metallers ALL THAT REMAINS, has died. He was only 44 years old. The news of his passing was broken by the group in a social post earlier today.

Oli's bandmates wrote in a statement: "We were devastated to learn that Oli Herbert, our friend, guitar player, and founding member of ALL THAT REMAINS, has passed away.

"Oli was an incredibly talented guitarist and song writer who defined rock and metal from the Northeast. His impact on the genres and our lives will continue indefinitely.

"No further details are available at this time. The band and family request that you please respect their privacy and remember Oli by celebrating the great music he made."

Oli's widow, Beth, later released the following statement via his official Facebook page: "Thank you all for the kind thoughts and words. I don't want to go into what happened until we have a complete picture, but as soon as we do, there will be a statement from the family on this page. In the meantime, please respect our privacy as there are still relatives being informed of Oli's passing. Thank you."

Asked what originally got him into playing guitar and making music, Oli told Tone Freqs in a 2013 interview: "I got into metal around 1986, and started listening to MÖTLEY CRÜE, DOKKEN, OZZY OSBOURNE and stuff like that. Right before I started playing, I got into METALLICA and MEGADETH.

ALL THAT REMAINS's ninth full-length album, "Victim Of The New Disease", is due on November 9 via Fearless.

We were devastated to learn that Oli Herbert, our friend, guitar player, and founding member of All That Remains, has...

Posted by All That Remains on Wednesday, October 17, 2018