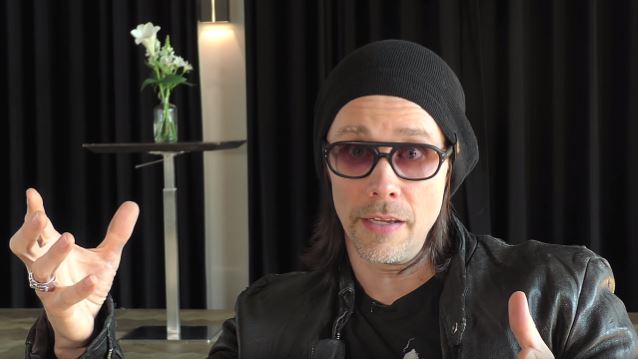 ALTER BRIDGE vocalist Myles Kennedy told FaceCulture in a new interview that even though the band's new album is called "The Last Hero", it's not necessarily a politically oriented record. Kennedy explained: "The trick was not to get too directly political, because all that does is piss people off. One of the key emotions a lot of people seem to be feeling is disillusionment, and what I try to do as a lyricist is touch on these emotions."

Guitarist Mark Tremonti agreed, telling The Pulse Of Radio that the album title and concept is more general in nature. "Myles kind of ran with that as a theme for the record," he said. "It's a calling out for leaders in this world that you can trust and put faith in and, you know, it's just such a circus right now, especially here in the States, with everything that's going on. So it's just, you know, a call out to find new leaders in this world."

"The Last Hero" is scheduled for worldwide release on Friday (October 7). The first single is called "Show Me A Leader".

A previously unreleased song called "Breathe", first recorded by the band in 2004 during the sessions for its debut album "One Day Remains", will be included as a bonus track on the Best Buy edition of "The Last Hero".

ALTER BRIDGE is out on a short headlining tour to promote the album's release that brings the band to Nashville on Wednesday (October 5).