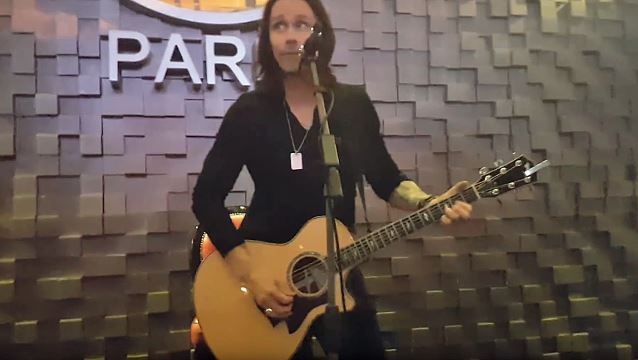 According to MylesKennedy.fr, ALTER BRIDGE frontman Myles Kennedy played an acoustic set at Hard Rock Café in Paris, France on September 8. He was in Europe doing promotion for ALTER BRIDGE's new album, "The Last Hero", and a free gig was planned to finish the day in Paris. ALTER BRIDGE guitarist Mark Tremonti was supposed to be there too, but he couldn't make it because of the hurricane in his home state of Florida.

Check out video footage below.

"The Last Hero" is due on October 7 by Caroline Records in the United States/Canada and Napalm Records throughout the rest of the globe.

"The Last Hero" is now available for pre-order via iTunes, Amazon and Google Play. Fans who order the album will receive an instant download of "Show Me A Leader". The album is also available in various fan bundles at www.Alterbridge.com/store.

ALTER BRIDGE is heading out on select U.S. headline dates in support of "The Last Hero" and select ticket purchases will come with a digital album. The headline run kicks off September 22 in Destin, Florida. The band will also perform at a few festival dates this fall, including the inaugural Houston Open Air, Sonic Boom, Louder Than Life and the Tulsa State Fair.

ALTER BRIDGE is Myles Kennedy on vocals/guitars, Mark Tremonti on guitars/vocals, Brian Marshall on bass and Scott Phillips on drums.