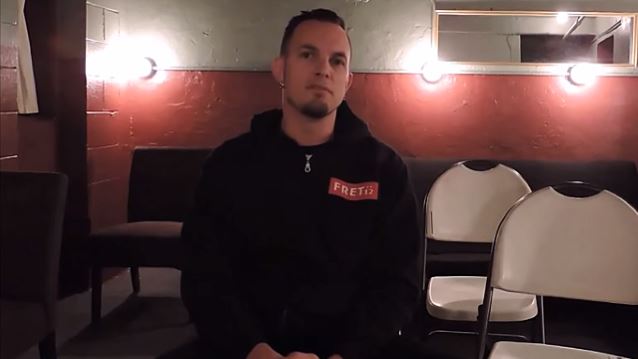 In The Now Magazine 's Brett Tully recently conducted an interview with guitarist Mark Tremonti of ALTER BRIDGE and CREED. You can now watch the chat below.

Asked if there has ever been a low point in his music career where he came close to calling it quits, Tremonti said: "No. I mean, there's nothing else I'd wanna do. This is all I know how to do."

He continued: "When CREED was coming to an end, it just made me work harder and try to survive. Since then, the Internet's kind of come in and shaken up the business, and it's just been a constant struggle to just stay revelant, stay out there and make a living.

"It's definitely the hardest it's ever been for a lot of bands in their career right now with everything that's been going on, but there's nothing else we'd rather do."

Regarding the fact that even bands like JUDAS PRIEST and IRON MAIDEN are not selling the same number of tickets and playing to as many people in the U.S. as they once did, Tremonti said: "Well, those bands are still selling out arenas over in Europe. Europe's what, I think, really has kept rock alive. If it wasn't for Europe, we'd probably be retired."

He continued: "We've been struggling so much here in the States. It's finally getting larger here in the States, but right off the bat it got big in Europe and we were playing the arenas over there. We get to play shows with all the bands you mentioned. We just played with IRON MAIDEN a couple of times on the last tour, we went [on] right before METALLICA, right before SOUNDGARDEN and [BLACK] SABBATH… all these great bands.

"Europe's a really strong rock market. In the States, I think, the big rock stars turned into pop stars, and the rap stars…"

Tremonti added: "Rock's such a faceless scene right now. Everybody knows what Lil Wayne looks like and what Jay-Z and Pink and all the pop stars look like, but rock stars are kind of… Hopefully it's a cyclical thing and rock will come back and be as big as it once was."

ALTER BRIDGE current U.S. headlining trek winds down on October 26 in Los Angeles. This is likely the band's final run in support of 2013's "Fortress" album.