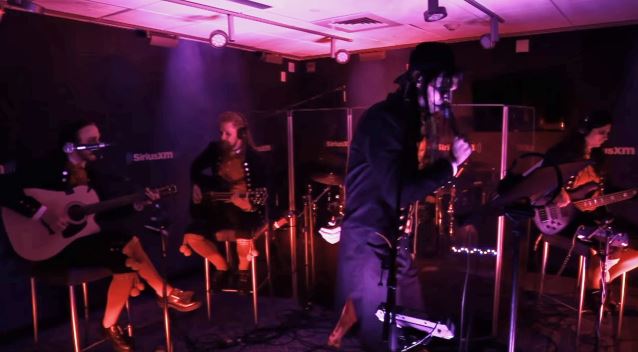 The first four paragraphs of "Den runkande spårvagschauffören" (translated from Swedish) are as follows:

"He has been driving his tram since thirty-three
because of the monotony, he became ill
Then he got a truly fantastic idea
He began to jerk off his c**k

You can watch video footage of AVATAR's performance below.

AVATAR is currently touring the U.S. in support of its new concept album titled "Feathers & Flesh", which was released onMay 13 via Another Century in Europe and Entertainment One (eOne) in North America and Canada.

AVATAR frontman Johannes Eckerström told AXS that the idea of creating a concept album came first and then the journey to find the proper concept became the first leg of that process.

"There was a period of figuring out what would be our story to tell," he said. "I first started with, you know, I'm a clown, and it's horror, and it could be a haunted theme park, and then I fell asleep from my own thoughts because it felt so cliché, boring, lame, stupid. So I moved on and then it was a Swedish novel series, 'The Emigrants' series, and I thought there's some stuff in here that could be turned into something, then I realized that Björn and Benny from ABBA did a musical about it in the '90s, so that one was taken. [Laughs] So I reached the conclusion it needed to be something where we had the same ambition as we do with the music — to do something fresh and original. So I started to soul search for an original story and that led me to researching the concept of fables."