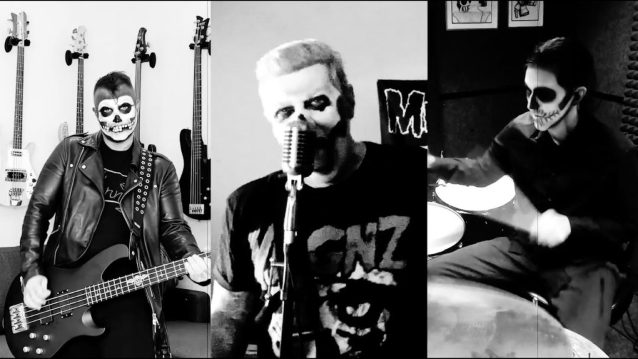 Three members of AVENGED SEVENFOLD have recorded a cover of the MISFITS' "Hybrid Moments" and have uploaded an accompanying video to their YouTube channel. Zacky Vengeance, Johnny Christ and Brooks Wackerman painted their faces in MISFITS-style makeup and filmed the video remotely during the coronavirus pandemic.

Three months ago, AVENGED SEVENFOLD's M. Shadows confirmed that the band's next album will be released before the summer of 2022. Five months earlier, he told the Minneapolis, Minnesota radio station 93X that "70 percent" of the follow-up to 2016's "The Stage" album was "done." He said: "We're working on stuff. We have some things we can't finish right now 'cause of COVID — string players, et cetera. We know Andy [Wallace, AVENGED SEVENFOLD's longtime mixer] doesn't wanna travel, or his management doesn't want him to travel because of COVID. So there's just a lot of things going on."

As for when fans can expect to see the new AVENGED SEVENFOLD LP released, M. Shadows said: "It doesn't make sense for us right now to put out a record and not be able to tour it. The world has changed. Putting out a record on Spotify without touring for a rock band, it just doesn't make sense to us. So we're gonna wait till everything is back, then we'll come out with the record, finish it up, and all will be good."

Last December, M. Shadows told Kerrang! magazine about the musical direction of the new AVENGED material: "The [new] record sounds nothing like 'The Stage' — it's a completely new direction, and it sounds nothing like anything we've done. That's all I'll say about it: it's over the top, and it's very eclectic and wild."

AVENGED SEVENFOLD kept a low profile during 2019 and will likely not return to the road until early 2022. A blood blister on M. Shadows's vocal cords forced the band to cancel a summer 2018 tour with PROPHETS OF RAGE and THREE DAYS GRACE.

"The Stage" was surprise-released in October 2016. The release of the disc, which was announced the night it went on sale, earned the lowest sales of an AVENGED SEVENFOLD album in 11 years.