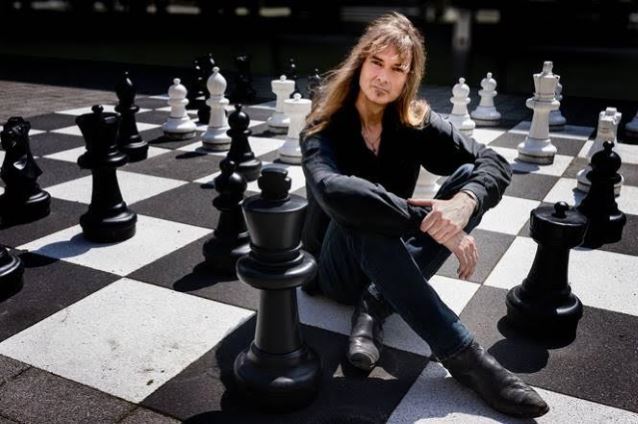 Arjen Lucassen and Mascot Label Group CEO Ed van Zijl go back twenty years. Ed was doing business out of his one-man office when Arjen showed up on his doorstep, with AYREON's debut album, "The Final Experiment", in hand. They didn't ink a deal that day, but both parties are extremely pleased to say that as of 2016, Music Theories Recordings (part of Mascot Label Group) is AYREON's new home.

AYREON is in a class of its own. You might call Lucassen's AYREON studio albums "rock operas." Or, to be more precise, you may prefer a description like, "ambitious studio projects combining progressive rock, metal, and folk over intricate storylines, brought to life by countless famous guest singers from all over the world." But no matter how you categorize it, the AYREON album collection offers highly creative rock music with a quality in composition and production rarely heard in the last twenty years.

Ten years with hardrock band VENGEANCE brought Lucassen recognition in not just the Netherlands, but in Germany, Switzerland, Japan, the U.K. and the U.S.A., as well. When he started writing and recording on his own in the early '90s, it was the funding of a Japanese record label that got the ball rolling. "The Final Experiment" was AYREON's first album, released in the Netherlands in 1995 by start-up label Transmission Records. It set the tone for the project, with intricate sci-fi/fantasy storytelling and timeless progressive rock featuring a lineup of world class vocalists and musicians, including Barry Hay (GOLDEN EARRING), Jan-Chris de Koeijer (GOREFEST), and KINGDOM COME's Lenny Wolf.

"Into The Electric Castle" was released to critical acclaim in 1998, and the album went on to sell over 100,000 copies. The twin albums "Universal Migrator Part 1: The Dream Sequencer" and "Universal Migrator Part 2: Flight Of The Migrator" (2000) proved that Lucassen was not afraid to take AYREON to yet another level of larger-than-life creativity. With "The Human Equation" (2004), Lucassen turned away from his earlier sci-fi themes to explore the realm of human emotions. "The Human Equation" was adapted for stage and performed in 2015 by a cast that included almost everybody from the original album. In 2007, Arjen returned to the sci-fi concept and linked all of the previous AYREON albums together, musically as well as lyrically, on "01011001". The album features no less than 17 vocalists.

"The Theory Of Everything" (2013) again received rave reviews around the world and, like its predecessors, sold remarkably well in a time when few progressive rock acts manage to rise above the crowd. The album was released after a five-year break in which Lucassen concentrated on other projects, including GUILT MACHINE's album "On This Perfect Day", which was released on Mascot Records in 2009. The recording — quite a departure from AYREON's bombastic approach — attracted a very dedicated audience of its own.

Some years later, a few AYREON albums were released on vinyl and, according to Lucassen, "sold really well. That's when I realized that fans of GUILT MACHINE would probably appreciate a vinyl release too." By 2014, Lucassen met with Mascot's Ed van Zijl again. "I asked him if he would be interested in releasing GUILT MACHINE on vinyl, and he immediately said yes," explained Van Zijl. "It took months to figure out the details of the packaging and the extras, and then manufacture it. The fans were ecstatic! The first pressing was sold out online in just a few hours in June of 2015. Then Mascot decided to press more colors and black vinyl, as well."

Obviously the two started discussing Lucassen's other projects as well. When the topic of AYREON came up, Ed van Zijl offered Lucassen a deal he couldn't refuse… or could he? It took Lucassen six months to decide. "At first I didn't feel the urge to change labels," Arjen said. " But in the back of my mind was the feeling that I really liked the atmosphere and the people at Mascot. This Dutch company, close by, just felt good." The idea of trying something new finally tipped the scales: "Ed simply said yes to everything I asked for! Plus, it was time for a fresh new start."