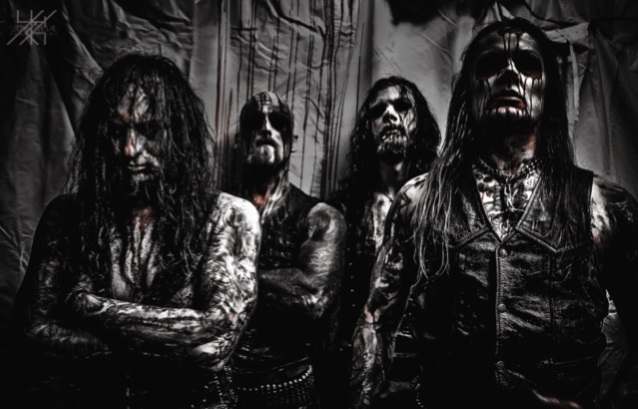 European diabolical death/black metal kings BELPHEGOR have released a lyrical performance video for "The Devil's Son", a song dedicated to the legendary violinist Niccolò Paganini (1781-1849), whose playing skills were so unique and virtuouso that he was told to have made a pact with the devil.

"The Devil's Son" is taken from BELPHEGOR's latest album, "Totenritual", which was released last September via Nuclear Blast. The disc was recorded at Stage One Studios in Germany and Studio Mischmaschine in Austria and was mixed by Jason Suecof and mastered by Mark Lewis at Audiohammer Studios in Florida. The artwork was once again created by Greek artist Seth Siro Anton, who also painted the cover artwork for 2006's "Pestokalypse VI" and 2014's "Conjuring The Dead".

BELPHEGOR singer, guitarist and founder Helmuth Lehner told The Rockpit about "Totenritual": "For 'Totenritual', we tuned our guitar down even lower than ever before, so we reached a different low-end tone and a more ritualistic vibe, a kind of new soundwall. Those lower-tuned guitars are a new challenge and an interesting experiment; it opened a new guitar world in my playing, I'm still blown away by how the new material rips. The tone and the atmosphere have really given a new heaviness to BELPHEGOR's sound."