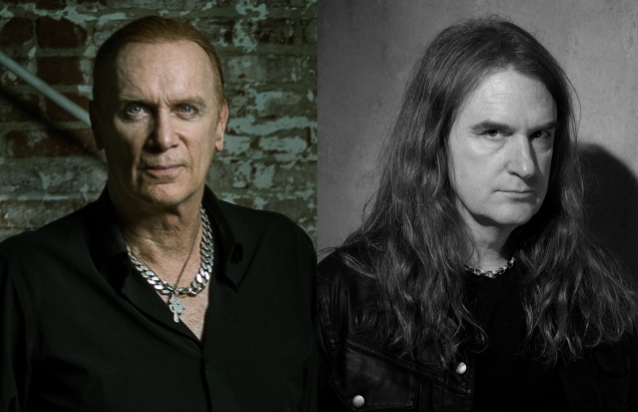 Legendary bassist Billy Sheehan says that he has no interest in joining MEGADETH as the replacement for the recently departed David Ellefson.

Asked in a new interview with Rocking With Jam Man if he would consider stepping into the bassist slot in MEGADETH, Sheehan responded (as transcribed by BLABBERMOUTH.NET): "No, not really. [It's] not necessarily my thing. But I wish all of them well. Dave [Ellefson] is a very good friend of mine, and I hope he's doing okay. I know it's a difficult, embarrassing and terrible situation. So, I wish him the best, and I wish the band the best."

Pressed about what he would say if MEGADETH leader Dave Mustaine approached him to play with the band, Sheehan said: "Well, [there are] a lot of guys I would recommend to him, but it's not necessarily my thing. But I think they're a great band, and I wish them well, for sure."

Billy also discussed the fact that Ellefson was fired from MEGADETH despite the fact that he denied all social media chatter that he "groomed" an underage fan.

"There may have been more at play within the band," Sheehan reasoned. "There might have been some tension already. Who knows? I know Dave very well, and he's a wonderful guy. Everybody has their moment where they do something they regret. We all do at some point in our lives. Unfortunately, now there's the Internet, and you can do something stupid and the whole world knows about it. So I feel for the guy, and I understand the situation. But I certainly wish him well. I hope he and his family reconcile and everything is okay with them. That's the most important thing."

Ellefson recently filed a report with the police department in Scottsdale, Arizona alleging unlawful distribution of sexually explicit images of him by unknown offenders. In the report, Ellefson admitted that he had been exchanging sexual text messages with a Dutch teenager, who captured a video of several of their virtual "masturbating encounters" without his consent and shared them with friends. (According to Ellefson, the woman was 19 at the time of their first virtual sexual encounter.) The 56-year-old Ellefson, who lives in Scottsdale, first became aware of the video on May 9, when the claim "David Ellefson of MEGADETH is a pedophile" appeared on Instagram. Ellefson told police he was notified on May 14 by MEGADETH that the band would be parting ways with him. Three days later, he was fired.