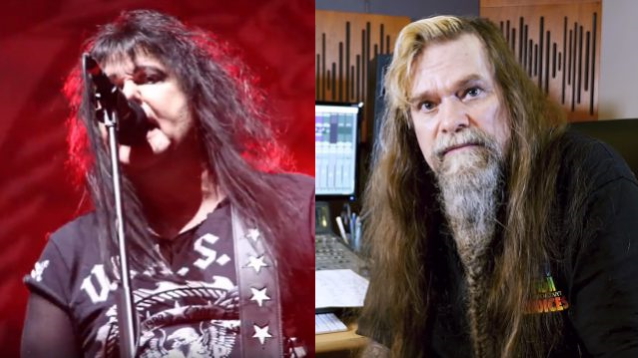 Blackie Lawless has shot down Chris Holmes's claim that the guitarist was "screwed" out of receiving royalties on the W.A.S.P. albums that he performed on.

Lawless discussed Holmes's tenure with W.A.S.P. in a new interview with SiriusXM's "Trunk Nation". Asked to respond to Holmes's assertion in Chris's recently released documentary "Mean Man: The Story Of Chris Holmes" that he was financially taken advantage of during his time in the band, Lawless said: "I don't really know much about… I spoke to [former W.A.S.P. guitarist] Randy Piper a couple of years ago. I don't really know what's going on with the rest of the guys. And I'm not sure exactly what you're talking about with Chris about not being paid.

"Chris, at two different points in his musical career, received settlements from this band; he signed documents as such," Blackie explained. "And he was paid quite well.

"I haven't seen what you're talking about. The answer I'm giving you right now is based on what you just said to me."

The W.A.S.P. frontman went on to confirm that he hasn't seen Chris's documentary and was once again asked about Holmes's claim that there is money and songwriting credits that he didn't get that he's due. Lawless said simply: "That is not true."

"I've known him since I was 18, 17 — when he supposedly got done playing with the [NEW YORK] DOLLS or whatever; I knew him them. And not in my farthest dream could I think in the first album that that would have happened with him. It got so unbearably about him than anything else. It was radical. The band was four people when it started; that's what made us. And then with Tony [Richards, drummer] gone; [Blackie] has to be on the cover [of W.A.S.P.'s second album, 1985's 'The Last Command']. His idol was Muhammad Ali. And that's only one person; it's not a team. That's what he wants. On the road, he's made some bad decisions. And I even would tell him about it, and he wouldn't listen to me.

Holmes went on to say that he learned "a lot of things" from playing in W.A.S.P. However, he was quick to point out: "If I would have understood what was going on in the beginning, about what happens after a record is done and what happens in between — you record it and it goes out from the label, what they do — if I would have known what goes on there, I would have only done one album. That's it. I would have said, 'Fuck you. I'm not doing it that way.' But I didn't know. And if you're not told there's a meeting, well, you don't go to the meeting, right?"

"W.A.S.P. never played any shows until I was in the band, so where does a band start — when they record or when they do their first show?" he continued. "I came in before the first show, and it was 'one for all, all for one.' But then when money came into it and fame, people changed — they change real bad. And I never changed. I don't change. I haven't changed the way I think, the way I am. I'm not gonna change. I am what I am.

"During the [making of the] second [album], I was told the manager wants to use Blackie's [Lawless, W.A.S.P. frontman] image [on the cover], which the manager didn't tell me that — Blackie told me that."

According to Chris, he, Piper, drummer Tony Richards and Blackie were all part of W.A.S.P. initial management contract, but Blackie was the only one signed to the record label. "Everybody thinks we [all] signed to the label, but it wasn't [like that]," Holmes told "Trunk Nation".

"I never learned about the business till about 10 years ago," he explained. "How do you learn about the business? You've gotta be in there with the manager and all that stuff, so I was always kept from that… I put my trust into somebody, and [I found out later that he was] sticking a knife in my back. I didn't find that out until 2010 or '11.

Despite the fact that he only got songwriting credit on a a couple of the songs on each of the first four W.A.S.P. records, Holmes was adamant that his input was essential to the band's overall sound.

"If I hadn't joined in the beginning, it would have never worked. Blackie told me that the first day, when he came and talked to me to play in W.A.S.P. He says, 'I've got this band. It's not gonna work unless you're in it.' He told me that to my face."

In October 2020, Chris said that he would never consider returning to W.A.S.P. unless Lawless agreed to pay him the publishing royalties that he allegedly owes him. He told Canada's The Metal Voice: "A lot of people think I made money from W.A.S.P. I've never gotten my royalties, or even my songwriting. All the stuff that I wrote, I've never gotten paid one penny. And you know whose fault it is? It's my my fault for not knowing the business, how it is. I trusted somebody.

"After every album, when the album is done, how they split up the publishing with the publishing contracts, the publishing companies — that's where the money comes from," he continued. "I was never told about when that meeting was. Because the other guys in the band never wrote — I was the only one [other than Blackie]. So I'm the only one that they have to screw over to get all the publishing. So I was never told. Then when I dug into it in about 2006 or [2007], I went into Sanctuary Music, had a lawyer go in to find out where all my publishing is, and I was written in as a session player into all the records. And if you don't know about it, and you're not told, and you don't see, you don't know. So I trusted Blackie Lawless about that. And when I found out, it really kind of yanked me wrong. It yanks me wrong — it makes me see he was sticking a knife in my back from the first day, from the first album, and not telling me, and being my best friend."

During a November 2017 press conference in Moscow, Russia, Lawless was asked what he would say to those W.A.S.P. fans who continue to call for the band to reunite with Holmes. He responded: "People get divorced for certain reasons, and there's times when the kids want the parents to get back together, but sometimes it never happens. And this is one of those [times]. Sorry."