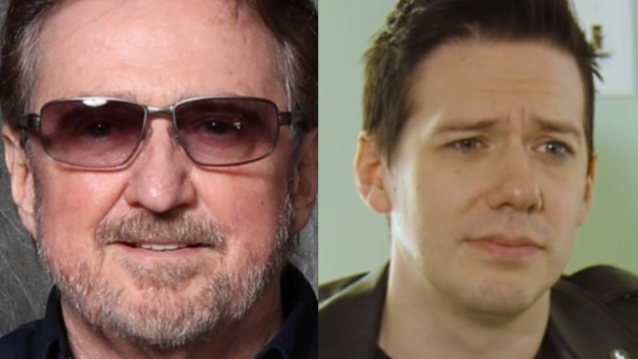 GHOST mastermind Tobias Forge addressed the BLUE ÖYSTER CULT comparisons during a recent interview with Loudwire. He said: "I love BLUE ÖYSTER CULT. They are nowhere near as much of an influence as people think they are for me. Especially not back [in GHOST's early days]. I'd say I probably listen to them more nowadays than I did back then. But never, ever were they as much of a big influence as… I can list so many more things that would be way more obvious, where I can say, 'That riff is from that. That riff is from that. That riff is from that. That vocal bit is from that.' It's just that the combination of, basically, slightly more confrontational rock and sort of AOR vocals that makes everybody think that it's, 'Oh, BLUE ÖYSTER CULT.' Just because a lot of the other, sort of, 'occult rock' bands usually have just one singer, like all the TROUBLEs and all the SAINT VITUSes and all those — it's just one singer, so you don't have that sort of multi-layered vocals."

BLUE ÖYSTER CULT is hard at work on new material for a studio album that will be released next year.

With a history spanning almost five decades, BLUE ÖYSTER CULT has sold more than 24 million records worldwide, including seven million in the United States alone. Songs like "Burnin' For You", "Godzilla", "Astronomy" and "(Don't Fear) The Reaper" are true classics and staples of the classic rock genre. Often cited as a major influence by some of the biggest names in hard rock and heavy metal (including IRON MAIDEN and METALLICA), BLUE ÖYSTER CULT's sound has evolved through the decades, touching hard rock, heavy metal, progressive, and psychedelic rock. BLUE ÖYSTER CULT is sometimes referred to as "the thinking man's heavy metal band," due to its often cryptic lyrics, literate songwriting, and links to famous authors.

Earlier in the month, Forge revealed to Finland's Kaaos TV that he will record one new song in January before getting to work on GHOST's fifth album.

Forge did not reveal where the standalone song will surface, but he added that he''ll continue writing through May, with plans to enter the studio on June 1.

The new GHOST album will be out in early 2021 and will follow up 2018's "Prequelle", which contained the rock radio hits "Rats" and "Dance Macabre".