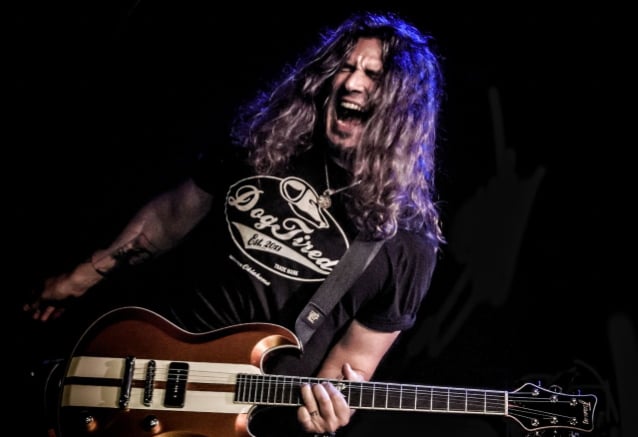 Phil X, guitarist for BON JOVI and THE DRILLS, recently did an interview with the podcast "Side Jams With Bryan Reesman" and spoke about the charity work his family does for frontline workers. He also told a story about jamming with JUDAS PRIEST at Rock 'N' Roll Fantasy Camp in 2016 when he was one of the faculty members.

"It was a good week too because I think Tony Iommi [BLACK SABBATH] was there, so I got to sing 'Neon Knights' with Tony Iommi and that was amazing," recalled Phil. "I think with JUDAS PRIEST, they split up the band. So one day, it was Rob Halford and Richie Faulkner, and the next day it was Scott Travis and Ian Hill. But then when we all jammed at the Whisky [A Go Go in West Hollywood], it was all four. It was really, really amazing. It's kind of funny, because sometimes they get up there, like Rob Halford gets up there, he doesn't know who's a faculty member. He doesn't know who's paying to be there. So we're on stage, and I know Richie. We've spoken for years and jammed a couple of times. We're doing 'Hell Bent For Leather', and he goes, 'Why don't you start?' I go, 'Yeah, but let's do the solo in unison, that would be amazing.' And he's like, 'Okay, let's do it.' So I started, and Rob looks over. He looks at the girl that runs the thing and he goes, 'He's good.' Like, who is this guy, you know? And then afterwards, she told me what he said. And I went, 'Hey, Rob, It's really nice to meet you. By the way, you know how Richie Faulkner kind of replaced K.K. Downing. I'm kind of in the same situation. I kind of replaced Richie Sambora in BON JOVI. And he's like, '….well, that makes sense.'"

Phil also spoke about a charity that he and his wife Lindy started at the beginning of the pandemic that they call Hero Drop. She "cooks a ton of food" that they deliver to frontline workers at fire stations and police departments, among others. The couple has many friends who work in hospitals and a friend who is a fireman.

"We take donations, said Phil. "We're in Nashville now, but we started doing the Hero Drop when we were still in L.A. last year. Then when we moved here in November, once we get settled, we should start doing Hero Drops again. But what happened last year was really interesting because we just started doing it. And before we knew it, without prompting it or requesting anything, friends and family started donating. It's a tough time, and these guys are doing something really amazing. And it can't be cheap. So here's some money. Then when we invited just anyone to participate or contribute, it started happening again. And it's happening here too.

"Usually, police stations here [in Tennessee] are like 100 people. We deliver in two drops. One is at lunch, okay, and the second shift would be delivered around six. So it's usually 100 people. The thing that we're doing on the 24th is the huge main department that deals with all the behind-the-scenes stuff, detective work and stuff like that. It's going to be 250 people. We're having a friend that's coming and he's gonna help us take it because we can't just get it into our SUV. So we're gonna have two SUVs. And the kids usually come too which is really exciting.

"The cool thing is my birthday was last week. My wife surprised me. We had a couple of friends that are all nurses or firemen. They've all had the vaccine. They came as a surprise to me because one couple came from Chicago and the other couple came from Vegas. So it was, like, 'Wow, we have visitors.' Like, we never have visitors. But the cool thing was, I'm like, 'Why is there a table on the sidewalk in front of the house?' And my wife's like, 'Stop asking, I'm not telling you.' And I'm like, 'What's going on? Do you know what's going on?' 'Okay, it's time, they're here.' I'm like, 'Who's here?' So I go out front and Brentwood PD, 10 police cars, parade in front of the house. They're going 'Whoop whoop' and all this stuff, and this one guy who sings higher than me is singing 'Happy Birthday, Phil'. And not only that, but she surprised them by taking what we were having for dinner and putting it into to go plates. So every officer that showed up to drive by also got hot lasagna and some meatballs and salad. It was so amazing. You know, what comes around goes around. It's just an incredible positivity of feelings going around.

"My girl came up with it. She goes, 'These guys are heroes. We should be feeding them.' There was one name before, but then we settled on Hero Drop."