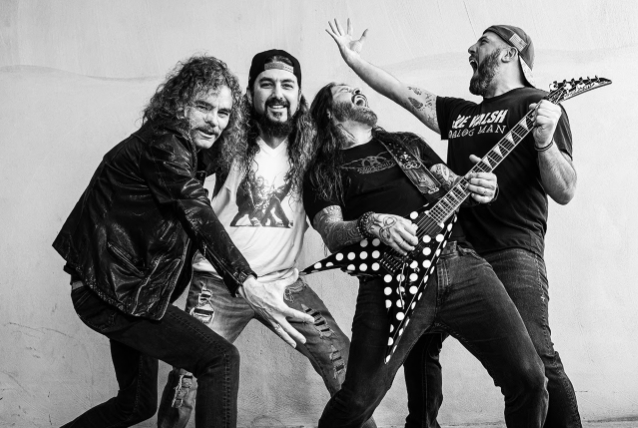 The members of BPMD first came together in the summer of 2019 with one goal in mind: to pay homage to some of their favorite classic rock tunes, give them their own heavy twist, and to have a blast doing it. We all could use a bit of fun, and that's what BPMD is here to provide — a party on wax performed by some of the greatest musical talents in the world!

Menghi says: "We're super excited about our first BPMD record. Last summer, I was inspired and came up with this crazy idea and here we are, not even a year later, and it'll see the light of day in these very trying times. The planet needs something to feel good about, and I 100% whole-heartedly believe these tunes will do the trick. Buckle up and make way for BPMD…"

Blitz adds: "The BPMD sessions were very fun. They took us all back to our roots and even pre-roots. As it developed, we all realized it was something special, as did Napalm Records, with one listen."

BPMD will make its live debut at Bulldozer Bash 5 in Old Bridge, New Jersey on Saturday, May 30. The event, which will take place at Old Bridge Elks Lodge, is a benefit show to raise funds for the Old Bridge Militia Foundation, a 100% non-profit 501 C3 charity foundation. Show details will be announced soon.

This past January, Demmel told "The Blairing Out With Eric Blair Show" about BPMD's forthcoming debut album: "It's all cover tunes from American bands of the '70s. It's called 'American Made', [and it's got songs from] ZZ TOP, LYNYRD SKYNYRD, JAMES GANG, AEROSMITH, GRAND FUNK RAILROAD — all these cover tunes that we modernized them and not really thrashed them up, but we made kind of metal versions of them. And we think we found maybe a label home, and we're looking to put the record out here probably at the end of the first quarter, maybe beginning of second quarter. It's all up in the air right now."

Asked who came up with the idea to make an LP of 1970s rock covers, Demmel said: "Mark Menghi did. He said he was around his campfire listening to a SKYNYRD song, and he's all, 'Hey, I wanna record this and get some guys.' And he called us up. I flew out to Portnoy's house, and we had the songs we picked. Each of us picked two, and then we had two songs that were kind of band picks that we needed to do. And we flew out to Portnoy's house in Pennsylvania. I flew in one day, did tracks, flew out the next day, went home and recorded guitar tracks and solos in a day. And the guys did their other tracks. We got it done pretty fucking quick."

Pressed to name his favorite song from "American Made", Demmel said: "I'm gonna have to say… There's a sleeper track. It's a BLUE ÖYSTER CULT song called 'Tattoo Vampire' that I picked. And Buck Dharma from BLUE ÖYSTER CULT actually played on the song. And it's got kind of a punky feel. 'Cause the original track is kind of rock and roll, but Menghi or Portnoy had this idea to make it kind of a RAMONES feel. So we picked it up. So, 'Tattoo Vampire' is my favorite."

Last year, Demmel told Bax Music that the BPMD recording experience marked the first time he had tracked rhythm guitars in 13 years. "In MACHINE HEAD, Robb [Flynn] was tracking all the rhythms after 'The Blackening', or pretty much during 'The Blackening' on," he said. "And it was exciting for me to be able to be the only guitar player and track the rhythms and do all the solos."

Ellsworth told Underground's Voice that his collaboration with Demmel, Portnoy and Menghi was "a fun project. It was kind of a summertime hobby project," he said. "We took American bands that were done in the '70s and thrashed up the approach. GRAND FUNK [RAILROAD]'s '[We're An] American Band'; MOUNTAIN; CACTUS; BLUE ÖYSTER CULT. We put the MACHINE HEAD, SONS OF APOLLO, METAL ALLEGIANCE, OVERKILL spin on the whole thing. It's a cool project."

Demmel, Portnoy, Ellsworth and Menghi previously performed together in METAL ALLEGIANCE, the all-star collective that is anchored by Menghi, Portnoy, MEGADETH's David Ellefson and TESTAMENT's Alex Skolnick. In addition to their semi-frequent live appearances with the group, Demmel played on three tracks on METAL ALLEGIANCE's 2015 self-titled debut, while Ellsworth contributed vocals to one song on the project's 2018 sophomore effort, "Volume II: Power Drunk Majesty".