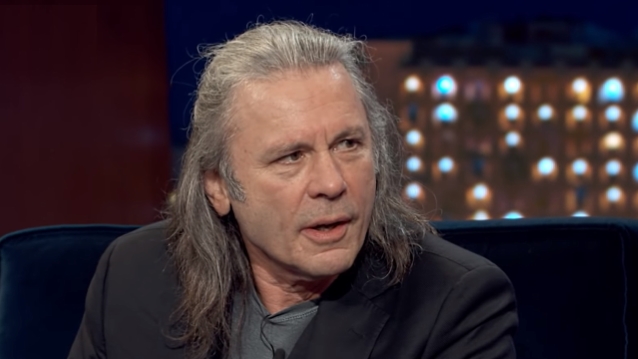 Bruce Dickinson says that he "didn't want to go back to the past" when he returned to IRON MAIDEN 20 years ago.

Dickinson joined MAIDEN in 1981, replacing Paul Di'Anno, and made his recording debut with the band on the 1982 album "The Number Of The Beast". He quit the group in 1993, pursuing several solo projects, and rejoined in 1999.

In a recent interview with Spain's RockFM radio station, Dickinson said that he had no interest in reconnecting with MAIDEN if it meant only focusing on nostalgia.

"Well, all I needed to know was that we were not gonna come back as some sort of a reunion-type thing," he explained (hear audio below). "I didn't want to go back to the past. This was gonna be about putting a band together that was looking ahead to the future — to do a great new album and to really restart the whole impetus and direction of the band. And Steve [Harris, MAIDEN bassist and leader] said that's what he wanted to do, and I was, like, 'Okay. Let's do it.' And, of course, the first album we came out with after that was [2000's] 'Brave New World' — I think one of the best MAIDEN albums that we've ever done."

During Dickinson's absence from MAIDEN, the band released two albums with his successor, former WOLFSBANE singer Blaze Bayley — 1995's "The X Factor" and 1998's "Virtual XI" — which saw MAIDEN relegated to playing small theaters in America for the first time in years.

Dickinson has spent the last few months making a string of speaking appearances on the back of his recently released autobiography, "What Does This Button Do?". At each show, Dickinson has been reading excerpts from his book, delivering slides and hosting a question-and-answer session in which fans can ask all the questions they have been dying to know about what it's like to front one of music's most iconic bands.

Dickinson has several other interests beyond music. He is a licensed commercial pilot and owns an aviation company. He has written other books, done some acting and brewed beer.

In 2015, he completed a round of chemotherapy for a tumor on the back of his tongue and was given a clean bill of health.

The concept for MAIDEN's current "Legacy Of The Beast" tour was inspired by the band's mobile game and comic book of the same name and the stage set design features a number of different but interlocking "worlds" with a setlist covering a large selection of 1980s material with a handful of surprises from later albums to add diversity.