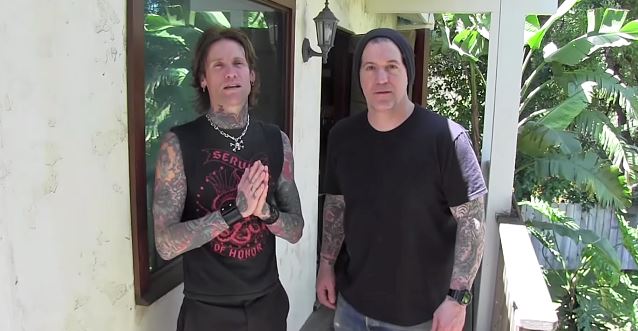 BUCKCHERRY's Josh Todd (vocals) and Keith Nelson (guitar) recently took Guitar World magazine on an exclusive tour of their studio. Check out the footage below.

BUCKCHERRY will release its seventh studio album, "Rock 'N' Roll", on August 21 via F-Bomb Records/Caroline. In anticipation for the upcoming record, the band has premiered a new track/video for their first single, "Bring It On Back".

On "Rock 'N' Roll", the Los Angeles quintet — Josh Todd (vocals), Keith Nelson (guitar), Stevie D. (guitar), Xavier Muriel (drums) and Kelly LeMieux (bass) — staunchly uphold the commandments of rock music with an arsenal of new anthems primed to explode on impact and teeming with riotous energy, sexy swagger, and primal chops intact. It's something that the boys have done since day one, but it's more necessary now than ever.

"There's been so much talk about how rock 'n' roll is dead and all of this bullshit," says Todd. "The funny thing is, that's been going on since we put out our first record in 1999. We wanted to call the new album 'Rock 'N' Roll', because this is what we've been doing our whole lives. We focused on making a record that encompasses all of what we are. You get every flavor of BUCKCHERRY."

They rev up "Rock 'N' Roll" with the propulsive first single and opener "Bring It On Back". From the jump, a robust guitar groove struts right alongside an unshakable refrain. It's got the band's signature hallmarks, but Todd pulled lyrical inspiration from a new source altogether. "When I'm not on the road, I race Go-Karts for my hobby," he says. "The song is really about racing. I had a driver named Kurt Busch in mind when I wrote the lyrics. They call him 'The Outlaw,' and he's a badass. It captures that intensity of racing and the mentality. I love it."

"Bring It On Back" is an immediate reminder that rock 'n' roll is alive and thriving in 2015. BUCKCHERRY have added fuel to the genre's fire for nearly two decades now. The Grammy Award-nominated outfit is responsible for smashes including "Lit Up" off their gold-certified 1999 self-titled debut as well as "Crazy Bitch" and "Sorry" from 2006's platinum "15". Along the way, they've shared stages with everybody from AC/DC and MÖTLEY CRÜE to SLIPKNOT and ROB ZOMBIE, among others.