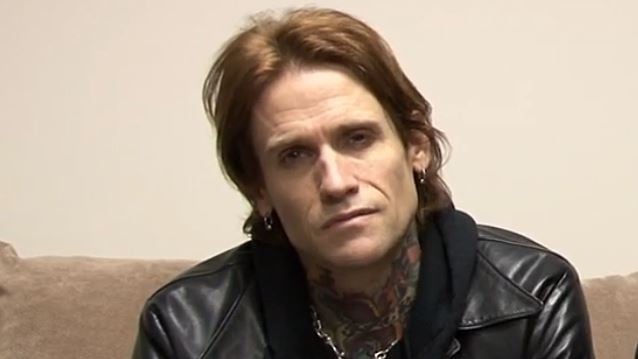 California rockers BUCKCHERRY will release a new EP, simply titled "Fuck", on August 19 via the band's newly established F Bomb imprint. A six-song EP that unapologetically rattles the speakers as much as it will the censors. The record features six balls-to-the-wall tracks that erupt with gritty riffs and sharp-tongued lyrics, including the radio single and riotous cover of Icona Pop's hit song "I Love It", which the band naturally cranks to 11 and renames "Say Fuck It".

Asked if the idea behind the EP was to offend as many people as possible, BUCKCHERRY singer Josh Todd told Yahoo! Music: "That wasn't the point. It's not about offending anybody as much as celebrating the word. There are so many ways to use the word. We wanted to capture that on an EP and not hold back or censor anything.

"We're big fans of the movie 'Scarface' and I remember for a long time the movie had the most 'fucks' of any movie and I thought that was so rad."

He added: "It's not just some silly rock record. We put a lot of thought into it and the songs definitely have a lot of dynamics. We set out to make a great product and just have fun with it.

"Our last album, 'Confessions', was a huge undertaking. It was a very emotional record, and so the 'Fuck' EP was really fun for us. We would come in every two months for a couple weeks and write songs, and we finally came out with a really cool little piece in the BUCKCHERRY puzzle.

"We were thinking of names for the label and we thought F-Bomb was a great name. But it's not like I had to get this out of my system for a certain reason. We just wanted to put something together that was fun, reckless, and quintessential BUCKCHERRY. There are no rules. We just go out there and have fun. We decided to have a theme to it and the only criteria was to have 'Fuck' in every title of every song. That's as deep as it got."

Regarding whether it feels good to be releasing the EP independently and not through somebody else's record label, Todd said: "This is the most exciting point in time for our career. We're so hands-on and it's so fulfilling in every way.

"When you have your own record company, you get to decide exactly where you want to go creatively and get the people involved that you want to work with. And you get to manage the money. It's so much better than being on a major. They basically spend all your money the way they want to and then you've got to recoup it all. And most of the time, you don't even like what they're doing with it.

"Everything's different now. We could never ever put out a record like 'Fuck' anywhere else.

"No one is putting out rock 'n' roll records anymore from bands that are taking any risks. The only rock records I hear have tons and tons of production and it's very safe and the melodies are regurgitated and sound muddy, like everything else on the radio. We never want to be like that. We always want to do our own thing, and I don't know of any other bands that sound like we do."