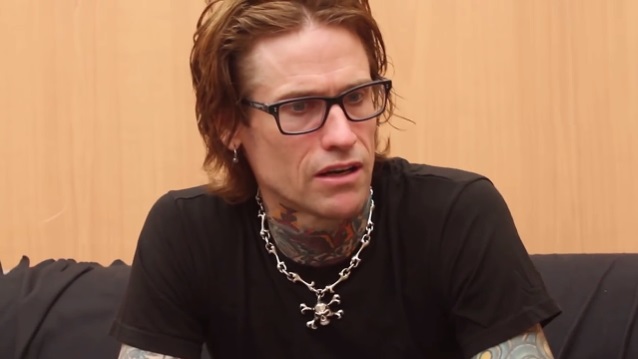 MetalSickness.com conducted an interview with BUCKCHERRY singer Josh Todd at this year's edition of Hellfest on June 21 in Clisson, France. You can now watch the chat below.

Asked about the status of the short film he helped co-write that was supposed to expand upon the themes covered on BUCKCHERRY's 2013 album "Confessions", Todd said: "we got the director [Billy Jayne]. I worked with Billy on the script. He's really talented. He directed the 'Gluttony' video. We got all the locations, we got it casted, and then it just was too much money; we couldn't raise the money. And at the time, the economy wasn't doing really in the United States and we had a lot of people [tell] us, 'You should [launch a] Kickstarter [fundraising campaign], you should ask your fans [to contribute].' And it didn't feel right to us to ask our fans for money when we ask them to buy our records, come to our shows, buy our merchandise… So it didn't feel right at the time. If we could raise the money, it would be great, but it's a lot of money to make a movie. To make just a 30-minute film, it was gonna be over $100,000. And it's a lot of money. So if we can get the money, yeah, we'll do it. But now I want to be on a bigger scale. It would be funner to do a full movie."

"Confessions" is a loose concept album that revolves around the notion of the seven deadly sins and is inspired by events in Todd's childhood.

BUCKCHERRY recently launched a new Singles Club subscription service for fans via PledgeMusic, which will deliver one cover song a month for the next six months. The group states: "Anyone that pledges gets an 'access pass' to the Covers Feed and lots of other one-of-a-kind goods and experiences. We're making this personal and it's all about new music and more songs we fucking love, coming from the studio right to you."

BUCKCHERRY's version of THE ROLLING STONES' "Beast of Burden" has just been released.

Perks for bidders include rare memorabilia, a custom tattoo design and chances to meet and hang with BUCKCHERRY.

BUCKCHERRY will release a new EP called "Fuck" in August.