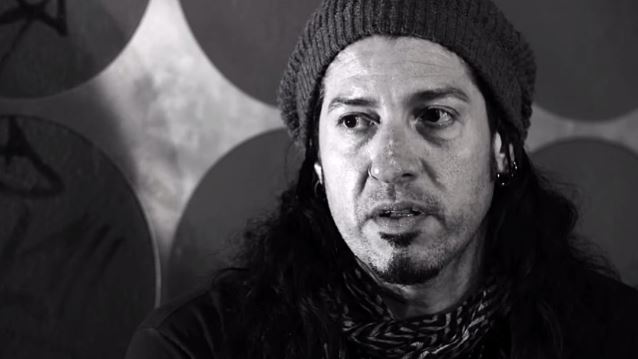 Drumtalk, the video podcast by German drummer and videographer Philipp Koch, conducted an interview with BUCKCHERRY drummer Xavier Muriel in November 2013 in Cologne, Germany. You can now watch the chat below.

Asked about the biggest adjustments he has had to make and learning experiences he went through in going from being an amateur musician to a professional drummer who spends most of his time on the road, Muriel said: "You know, the growing pains weren't with drumming, for me. And I think you'll find that most drummers that go from an amateur status to a professional status — minus all of the stuff that comes along with that; you know, drums endorsements and stick and head and cymbal endorsements, if you're lucky and blessed enough to get those… But I think the real growing was the physical demand on your body, if you indeed are a professional, by trying to stay as fit as possible on the road. Especially for us, we tour usually ten months out of the year. And when you're a younger cat, it's a lot easier. It's kind of like day camp for some people. But the growing pains were mostly about how to be a professional person all the way around."

He continued: "A lot of people look at what we do in this business as a gigantic party, and sex, drugs and rock and roll and all that type of stuff, and I did at one point in time too, when I was watching way too much TV thinking it was gonna be a certain way. And then you get out here and you realize that it's not. Some of it is, and most of it isn't.

"But the growing pains mostly were, like, how do you get along with eleven other dudes on a bus for ten months? That's the real thing. How do you check your ego at the door and realize that the person that's on stage that does what they do for the band is one person and the person that's off stage is maybe not necessarily the same guy? So, a lot of people kind of have the misconception.

"For me, it was about really learning how to get along with a lot of people. And the Groundhog Day effect, where you wake up, it's one o 'clock, you get lunch, you go into the venue, you find your dressing room, you try to find a place to work out, hopefully it's a decent-catered lunch, and then you have a soundcheck, and then you have interviews, and then you have a meet-and-greet, and then you have a couple of hours before a show, so you do whatever it is to take you out of the realm of the touring mind and life while you're missing your family, you're missing your loved ones, you're missing the things that you've come to know on an everyday basis — your bed, your refrigerator, your bathroom, all of your things that are always right there every time, every day. And then you get into this world that, it's not like that. You've got eleven other people you've gotta deal with, so that's eleven attitudes, 22 armpits, 22 feet… you know, it's all of those things. It's all of those things. It's different smells, it's different attitudes.

"But that's the biggest thing, I think, that a lot of people really never realize, [when it comes to] the growing pains of being an amateur to a professional, is the touring life. Not playing drums. Playing drums for an hour and a half to two hours, that's fun, that's easy for us. That's what we do. That's what makes us passionate about playing drums, and seeing people in the front just singing your songs that five or six years earlier were just an idea in a room with a bunch of dudes doing what they do. So that's the easy part, the playing, 'cause that's always fun, but it's the other 20-some-odd hours in the day where you've gotta kind of keep it together, on all respects. 'Cause you can be the best drummer in the world, man, you really can — you can be the best musician in the world — but if you can't get along with people, you're never gonna get hired. And if you do get hired, you'll probably get fired in the first week [laughs], you know.

"The biggest growing pain for me was really learning how to really, really work with people, because you're in a situation with a band that you're gonna be around more than you are your own family — if you are lucky enough to get to a professional level."

BUCKCHERRY last month released a new EP, simply titled "Fuck", via the band's newly established F Bomb imprint. Each of the six songs on the disc has the F-word in the title, including "Somebody Fucked With Me", "I Don't Give A Fuck" and the first single, a cover of Icona Pop's hit "I Love It", re-imagined as "Say Fuck It".