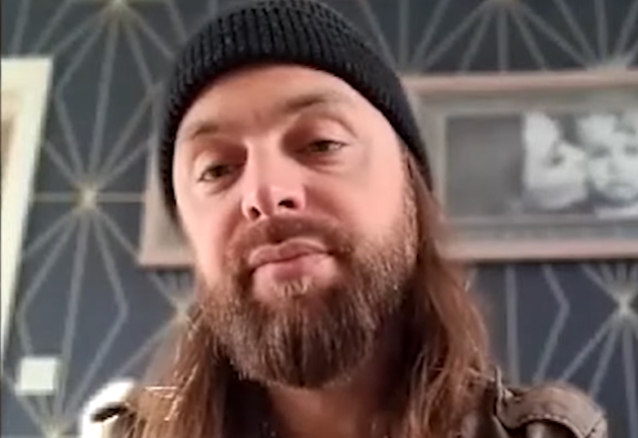 BULLET FOR MY VALENTINE frontman Matt Tuck spoke to NME about the fate of the six songs which were recorded during the sessions for the band's recently released self-titled album but were left off the final track listing, to be made available at a later date. Asked if the unreleased material follows in the same direction as "Bullet For My Valentine", Tuck said (as transcribed by BLABBERMOUTH.NET): "They're part of the same writing and recording process. Some of them are quite different and unique. We didn't want wanna put them on 'cause they were curvebally. But they were curvebally enough to have a spotlight on 'em post-album. We wanted the album to be a really solid, cohesive body of work from front to back and we didn't wanna throw too many creative curveballs in the album. We thought it was actually better to keep them off for standalone singles post-record and maybe have some kind of really crazy EP maybe at the end of the cycle, just so people can hear them, so they get the light of day. But, yeah, they're heavy, they're interesting, they're pushing boundaries and they're super exciting."

As for whether he thinks BULLET FOR MY VALENTINE's next album will be a mixture of 2018's "Gravity" — which he had previously described as "probably our most mellow/experimental record" — and the self-titled LP, Tuck said: "It really depends. In a year's, two years' time, whenever we decide to kind of get involved with that, we're just gonna do what we do — we're gonna see what comes out, what feels natural, what makes us happy, what makes us scared, what makes us motivated. And coming off the back of 'Gravity' and this album, we're just gonna that whole process of confidence and no-fear attitude into the writing process, and as soon as we start smiling and high-fiving, that's when we'll know we're on the right track."

"Bullet For My Valentine" arrived on November 5 via via Spinefarm/Search & Destroy. The LP was written beginning in September 2019 with longtime producer Carl Bown, who co-produced the band's 2015 album, "Venom", and produced and mixed "Gravity".

"Gravity" saw BULLET FOR MY VALENTINE's catalog surpass one billion streams in the U.S. That accomplishment solidified BULLET's status as one of the most elite bands in the hard rock scene.