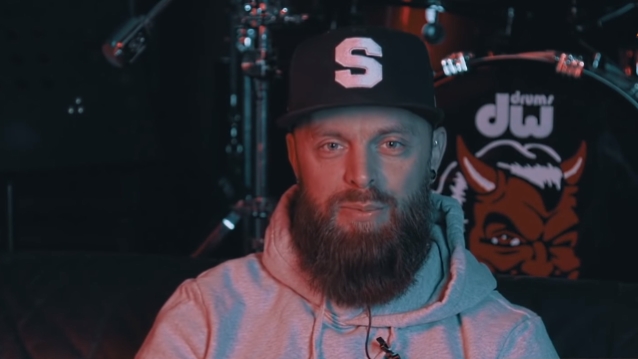 Metalshop TV conducted an interview with BULLET FOR MY VALENTINE frontman Matt Tuck prior to the band's April 11 performance in Bratislava, Slovakia. The full conversation can be seen below. A few excerpts follow (as transcribed by BLABBERMOUTH.NET).

Matt: "It was a whole growing-up's worth of material that just accumulated over many, many, many, many years, and then we kind of fine-tuned it into what people hear today. It was easy in the fact that we had a lot of stuff to choose from, but it was the hardest in many ways because we were just trying to get a record deal, and it was our first time ever making a record, so that is all new and [a] learning-as-you-go kind of thing. It's a very interesting time in any band's career, their first record. It was good — a really amazing experience. I can look back on it with really fond memories... We were given an opportunity to do what we'd always dreamed of doing, so we were just super-stoked to be there, and we just took our time and made sure that songs were right and spent a lot of time writing new songs as well, because we didn't really have enough songs for a full record, to be honest. There was a lot of ideas and a lot of demos, but nothing that we thought was good enough to make a debut album, so we wrote a few songs while we were recording."

Matt: "We were just putting the pressure on ourselves to kind of beat 'The Poison', which was not an easy thing to do after the success it had. It was more trying to step up our game as musicians, trying to write a bit more technical, a bit more fierce, and just trying to do our thing. We didn't step out of our comfort zone too much — we just wanted to elevate things a little bit in intensity and speed and technicality. The thing I struggled with most at the time was not having a voice, so there was a lot of stress and worry about that because when we made the record, I couldn't really do my job properly. That album now, when I listen to it briefly or a song comes on on the radio or we're at a rock club and something comes on, if it's from 'Scream Aim Fire', I kind of like, [cringe]. It could have been a lot better."

Matt: "We'd had our EP and our first two records recorded with the same people. You kind of get into a comfort zone, and it feels like a safe place to be, especially with the success that we started to get. For someone to come in and question everything was unusual. [Producer Don Gilmore] wasn't being a dick or anything — that's kind of what most producers do. They go in there and try [to] expose the weaknesses and the cracks and certain things and make them better. That's what Don did. The result of that was a lot of head-banging against the wall, a lot of friction when it came to writing, but ultimately led to probably the biggest album that we'd ever made, even to this day. That was the biggest-charting album we've ever had... That album took us from the big, medium-capacity rooms to arenas. It did something right. I think it's a stunning record in many ways, and I think the songwriting on it and the step up from the thrash thing to a more serious, mature songwriting kind of vibe, but [that] still has those heavy moments, I think was awesome. I love that record."

Matt: "I think it's a great record. I think when it comes to vocal melodies, groove, technicality of guitar-playing, solos especially, I think the album speaks for itself. Looking back, the only thing I can think of why people didn't latch on to it as much as 'Fever', for example, was because I think the sound of it wasn't big or aggressive enough. I think it sounds almost unfinished in a way, but we wanted to make something really simple. It was a conscious effort to do that. For those reasons, when we play those songs live or when really crank it up on a stereo, they fucking rip. I don't think people understand that for some reason... We're not 'old BULLET FOR MY VALENTINE'. We're not a band that takes our past successes and just fucking does it time after time. It's such a boring formula. I think a lot of bands rely on a hit, and they try and rewrite that album every time. That's not something we've ever done, and as we go through more of the records, it will become clear that that's not what we do. We never want to do that — we want to reinvent ourselves as much as possible every single record."

Matt: "It was us just doing something that we wanted to do at that time. The only thing we took from 'Temper Temper' was the ferociousness of it. That's what we wanted to recapture. As far as songwriting went, we didn't change anything. We were just in the moment — this is what we want to do; these are the songs that are being written; these are the songs that are going to be on the record, but let's make them fierce. Let's not try and make things simple, because it obviously didn't go down too well in the last one. Let's give a little bit back... I think it's a great metal record. We tried not to have those moments where we let the feel of the record dip. We wanted it to be fierce, fierce, fierce, anthem, fierce, fierce, fierce, anthem, and I think we did that."

Matt: "When we started writing, it became clear that doing another album like 'Venom' straight after 'Venom' didn't feel good at all. It just felt like we were regurgitating the same structure, the same style of riff... It didn't feel good in here [touches heart]. It felt a little bit boring. Even though 'Gravity' is a far simpler record, it was far more exciting and rewarding to make because we challenged ourselves not to do that. We took away a lot of the things which our band is renowned for, and we didn't rely on it at all... We've done that on the last one, and let's make something new, and let's go for the songwriting this time and the vocals and the lyrics, and let's make those shine by stripping everything back and letting that have its spotlight."

On the musical direction the band plans to pursue in the future:

Matt: "I think early signs are pointing in the direction of kind of a dirty love child of 'Venom' and 'Gravity'. We've written a couple of songs already, so it's taking the best bits of those two and kind of smashing them together. So far, people are quite excited about it."

"Gravity" marked BULLET FOR MY VALENTINE's first full-length recording with drummer Jason Bowld (PITCHSHIFTER, AXEWOUND) and bassist Jamie Mathias (formerly of REVOKER). Upon its June 2018 release, the album — which was made available through the band's new label home, Search And Destroy, an imprint launched in 2014 by Spinefarm and international artist management company Raw Power Management — cracked the Top 10 in Australia, Austria, Germany and Switzerland.