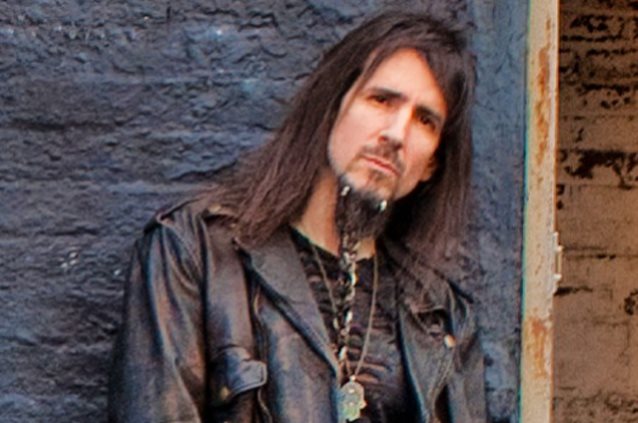 Former GUNS N' ROSES guitarist Ron "Bumblefoot" Thal says that he agonized over his decision to leave the Axl Rose-fronted outfit three years ago, explaining that he "wanted it to be something that [he] knew it wasn't ever gonna be."

Thal never officially announced his departure from the GN'R, but a source confirmed to Detroit music writer Gary Graff back in 2015 that the guitarist had been out since the end of the band's second Las Vegas residency in 2014.

Thal later revealed that he was focusing on his solo career and other projects after spending eight years playing in GUNS.

Asked by Meltdown of the Detroit radio station WRIF if he has seen the reunited partial classic lineup of GUNS N' ROSES perform in concert, Thal said (hear audio below): "No. It just feels kind of weird. I quit the band and they moved on and I moved on. It's not like we quit pretty. And also, what am I gonna do? I'm gonna stand in the audience and everyone's gonna be, like, 'Hey, you used to be there.' It's too weird, man.

"I wish 'em well and all, but to actually physically go [and see them], after hundreds of times on the stage with them, it just feels very surreal," he continued. "I always describe it like going to see your ex-girlfriend's wedding. And I don't mean any disrespect by that, and I do wish them well and I'm happy that they're doing so, so good. But for me to go and see it, it would just stir up a lot of stuff. So it's better that I'm just doing my thing, they're doing their thing and everybody just wishes each other well from afar. And I get lots of good reports from friends and everything and I'm still in touch with people in the camp. I'm real happy for them — they're on top of the world right now, so good for them."

Thal joined GUNS N' ROSES in 2006 and played on 2008's "Chinese Democracy", an album which contained music that had been written before he came into the group. He has also released a number of solo CDs.

Asked if he felt like he couldn't pursue as many outside projects as he wanted to during his GUNS N' ROSES stint, Thal told WRIF: "Yeah. And that was part of why I was feeling that unrest and that itch to move on, because, for me, I need to be super creative. I'm just not the kind of that's utility that you hire and he plays and gets paid and that's it. It means the world to me what I'm doing and who I'm doing it with. And it has to grow, it has to be a relationship that's… We have to be making music, we have to be doing everything that, when you were a little kid and you imagined being in a band, what that band is doing. And that's how it is with all the other bands I'm in. Like with ART OF ANARCHY, we're friends and we talk all the time. Even when we're doing other things, we're always in touch and we're supportive of each other and we laugh. We wrote together all in a room, and we create things together. Same thing with SONS OF APOLLO — it was us in a room just hammering it out. And we talk every day and we're friends. And that's the kind of thing I need to have — that's why I became a musician. I was five years old, I heard the KISS 'Alive' album, and I said, 'That's what I wanna do,' and I started doing it. And after eight years in GUNS, I just looked at it and I said, 'Am I doing what I wanna do?' And I felt like anyone could have been doing what I was doing at that point, and it didn't have to be me. And if I wasn't happy, and if they knew I wasn't happy, then I should get out and do what I'm supposed to do and let them do what they were supposed to do. And I knew that the reunion was coming. So it was, like, 'All right. Let me just get out of the way.'"

Thal added that "it definitely wasn't easy" to walk away from the highest-profile gig he has ever been involved with. "It's, like, you know you have to go, but you don't know how to let go," he explained. "And it was really tough, and I was a headcase — I was. 'Cause I cared so much — I really did — I cared too much about it, and I wanted it to be something that I knew it wasn't ever gonna be."

GUNS kicked off its long-rumored and long-awaited reunion trek in April 2016 with a club show in Hollywood and appearances in Las Vegas and at California's Coachella festival.