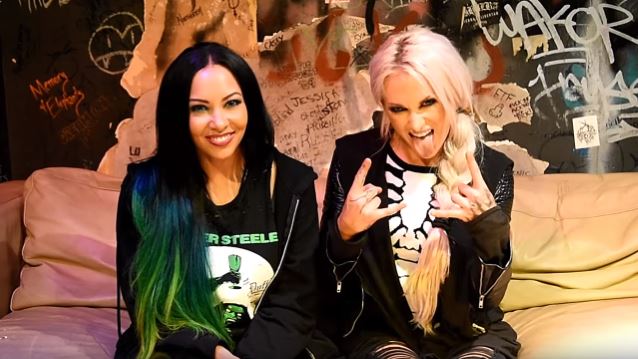 Metal Wani's Fernando Bonenfant conducted an interview with BUTCHER BABIES frontwomen Heidi Shepherd and Carla Harvey on April 22 at the Underworld in London, England. You can now watch the chat below. A couple of excerpts follow (transcribed by BLABBERMOUTH.NET).

Carla: "Well, it was different, because with 'Goliath', we had our whole lives to write that album. We had lyrics from when we were teenagers on that album, and we had been together as a band for years, so we had songs stockpiled. With 'Take It Like A Man', we had been on tour for so many years that we didn't have that same, you know, [batch of already completed] songs to go to, so we had to write the album on the road and stolen moments on days off, and then we had a little bit of time in the summer and then we wrote it in the studio. So it was a very different process. And I was really worried about it. It was a little frustrating to actually do it in that small amount of time. But that added pressure just kind of helped us really dig out this great stuff. And I'm so proud of the album and the way that it came out. And lyrically, the album, it has a lot of different emotions on it than 'Goliath' did, because on this album, we wrote a lot about these new feelings that we've had, being alienated away from our family and friends at home, with being on the road so often. So while it still kind of tips into how we felt growing up and different emotions, it definitely kind of has more adult emotions about, like I said, our current situation."

On being females in a male-dominated industry:

Heidi: "I think right now we're in a really, really interesting time with females in the metal genre, in the rock genre. You see more females involved in metal now than, I think, you've ever seen, and it seems like girls are feeling more comfortable being, like, 'Yeah, I love this and I can do it.' And other girls do it. And I think that there's a shift happening where it's becoming more accepted and people are very open-minded to [the idea of females in rock bands]. They don't think just 'cause you're a girl that it's gonna be, you know, shitty. [Laughs]"

On BUTCHER BABIES' plans for a new album:

Carla: "We are taking the whole summer off to write a kick-ass third album and get some rest and relaxation."

Heidi: "We're so excited. When we get back from this tour, we have two days [off] and then we're out with LACUNA COIL for a couple of weeks. But we're excited to really dive in and write a really, really great third album. We are so lucky that we have this ability to… that people allow us to actually write music and put it out. It's so cool. So, I think, for us, the writing process is really, really fun, and we're excited for the summer. And then in the fall, we'll be back out, and we'll probably be back over here at some point. [Laughs]"

"Take It Like A Man" was produced by Logan Mader, who has previously worked with FIVE FINGER DEATH PUNCH, DEVILDRIVER, CAVALERA CONSPIRACY and GOJIRA.