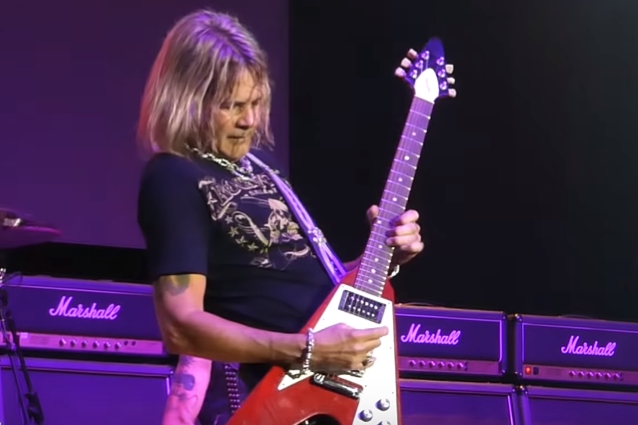 Carlos Cavazo says that he left RATT because "it didn't seem right" for him to keep playing with the band without Warren DeMartini.

Back in March, it was reported by Metal Sludge that DeMartini was fired by singer Stephen Pearcy and bassist Juan Croucier, with undisclosed sources telling the site that "serious issues" existed between the three members of RATT's classic lineup. Cavazo apparently confirmed the report a few days later, telling the site that he couldn't see himself continuing with the band without DeMartini. "I can't picture anyone else being there other than Warren," the former QUIET RIOT guitarist was quoted as saying.

Pearcy and Croucier are the sole remaining original members in RATT's current lineup, which made its live debut in July in Mulvane, Kansas. Joining them in the band are drummer Pete Holmes (BLACK 'N BLUE, RATT'S JUAN CROUCIER) and guitarists Jordan Ziff (RAZER) and Chris Sanders (BRITNY FOX, KNIGHT FURY).

In a brand new interview with Myglobalmind, Cavazo was asked about his decision to exit RATT once DeMartini departed the group. He said: "Warren didn't leave; he was actually fired from the band. They wanted me to stay, and I really didn't want to do it without him. He was the reason I was initially in the band. Without the original members up there, it seemed like it was falling apart, as they have problems. I figured maybe it's best that I go my own way. I really couldn't see myself up there with another guitar player. It didn't seem right."

According to Carlos, "everyone thought" that he and DeMartini made a strong guitar team. "I felt that I fit in really well," he said. "I have known the guys a long time, and no matter what happens, they will always still be my friends. I know we are going through some rough times now, but they will always be my bros. Hopefully we will get together someday and play again.

Asked if the door is open for him and Warren to play with RATT again, Carlos said: "I would hope so. Never say never. I would play with them again if Warren were back."

This past summer, Pearcy said that DeMartini "didn't wanna go out there" and play shows with RATT, leading to the guitarist's departure from the group. He explained: "We're privileged enough, 35 years later, to be able to go out and do what we do. And there's still a lot of great fans out there who'd love to hear the music. That's all that concerns me. So if somebody else doesn't wanna do it in the band, regardless [of whether it's Warren] or somebody else, [they can] take a hike."