"You heard that right! Tucked away in San Diego's South Park community is Hamilton's Pub and Café who now boast a delicious veggie burger called the 'Cattle Decapitation!'

"Inspired by the local veggie gore band of the same name, the burger's homemade all-vegan patty is a scrumptious mix of black beans, garlic, corn, potatoes and Hamilton's secret mix of spices! Add some lettuce, tomatoes, onions and vegan PCS sauce (stands for 'Phil Collins sucks'), this burger is simply the best damn veggie burger in town! Comes with excellent homemade pub chips and a bonus side of vegan sweet coconut curry sauce!

"If you live in San Diego or are visiting soon, stop by and grab one!"

Check out more photos at this location.

CATTLE DECAPITATION will release its new album, "The Harvest Floor", on January 20 in North America; January 30 in Germany, Austria, Switzerland and Italy; and February 2 throughout the rest of Europe via Metal Blade Records. A new widget for the album can be viewed below.

The drum tracks for "The Harvest Floor" were laid down with Zach
Ohren (ALL SHALL PERISH, DECREPIT BIRTH) before the rest of the instruments were recorded and the entire thing was mixed with producer Billy Anderson (MR. BUNGLE, MELVINS, SWANS) at Sharkbite studios in Oakland, California.

According to the group, "Sonically, the band has managed to finally capture and accentuate its live intensity that we've become known for and has created one hell of an album from start to epic finish! Conceptually, its misanthropy shall go unmatched. This is it, humans... ferocity at its finest."

Regarding the album title and packaging, the band states, "The actual title refers to the area of a slaughterhouse where the animal (of course in our case it always means the HUMAN) begins the agonizing process of death, usually done with a bolt to the forehead or a slice to the throat. 'The Harvest Floor' is a fitting title for an album laden in gore and the anti-human metaphors and sentiments CATTLE DECAPITATION fans have grown to know and love. Artwork [see below] by Wes Benscoter shows the outside of a large slaughterhouse/factory of doom and gloom with the general public being herded inside to meet their demise. The inside of the album layout reveals what's really inside that slaughterhouse: our misanthropic heroes of GORE (not core) at another hard day of work! Combined with the amazing artwork and conceptually brutal layout, 'The Harvest Floor' also contains an enhanced portion which sports an iPod-ready documentary titled 'Pandemic: The Damnation Epic - The Making of “The Harvest Floor' which, simply put, makes 'The Harvest Floor' an apocalyptic multimedia epic!

The song "A Body Farm" is available for streaming at this location. 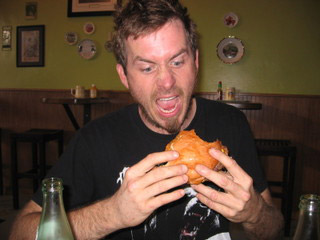