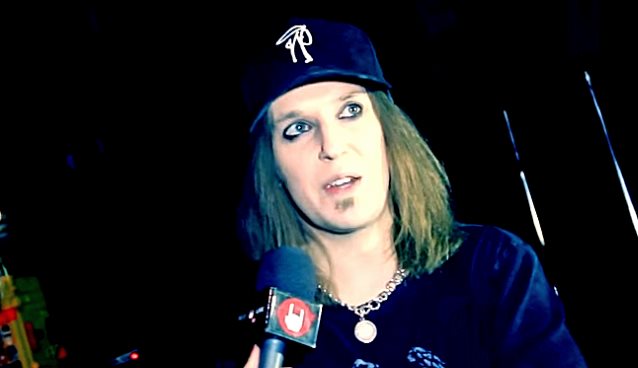 EMP Live TV recently conducted an interview with guitarist/vocalist Alexi Laiho of Finnish metallers CHILDREN OF BODOM. You can now watch the chat below. A couple of excerpts follow (transcribed by BLABBERMOUTH.NET).

On what he would do in life if he wasn't a musician:

Alexi: "Oh, God. I don't even wanna know. Maybe I'd be in jail or in some sort of mental institution, but music has definitely saved my life. So I have no other options; I never really did. I mean, I knew it since I was a kid that I was gonna… this is what I wanted to do, this is what I need to do. So I dropped out of school when I was fifteen, and I got a job and everything, but I, basically, just… All I did was just concentrate on playing, practicing, writing music. In 1993, we were, like, thirteen and fourteen years old, me and my drummer, and we started making demo tapes and stuff like that. And then the bass player, he joined in 1995, and then blah blah blah. Then we basically got a record deal in 1997 and then the rest is just history."

On whether he remembers the exact moment when he thought, "This is what I wanna do for a living for the rest of my life":

Alexi: "I kind of do, yeah, actually. Well, I was probably four years old or something like that, and I heard… My dad was playing a DIRE STRAITS record or something like that. And I went up to my dad, like, 'What is that?' I heard the riff, and I'm, like, 'That's so awesome.' I thought it was the best thing ever. He's, like, 'That's guitar.' And I was, like, 'That's what I wanna do.' No bullshit. Well, I started playing violin when I was seven years old, so I started with that. But at the same time, I sort of already had developed this obsession for guitar. I just knew that one day I was gonna play guitar. And I sort of kept bugging my parents about it for years and years, and finally when I was eleven years old, my dad got me my first guitar, and then, you know, there you go."

On the heavy metal music industry has changed since CHILDREN OF BODOM first started:

Alexi: "Well, it's changed a lot, actually. Ever since our first album came out, I could see the metal scene going up and getting more popular. Let's just say from the mid-'90s, the scene was pretty much dead, especially extreme metal; it was very underground and the shows weren't that big. And then it started to get a lot bigger pretty much everywhere. I mean, not just in Europe but U.S. as well. So I could see the change, which was awesome. But now, obviously, music business has changed a lot because of the Internet and all that crap, which I don't really wanna get into it too much, 'cause I don't wanna be one of those guys who are bitching and whining about it. You know, it is what it is, right? Okay, fine, people download shit, but you've just gotta play along. If you're just gonna cry about it, you're never gonna get anywhere. I've always said that if you know how to play your instrument, if you know how to fucking kick ass live, and if you can handle a lot of touring, you're always gonna be fine. And that's what we do. I mean, CHILDREN OF BODOM has always been a live band; we've always been about touring. We've been on the road since we were, like, eighteen and seventeen years old, so we basically grew up living like this. I'm thirty-six now, but it's, like, fuck, I don't wanna go home. This is what I do."

CHILDREN OF BODOM's latest album, "I Worship Chaos", was once again recorded at Helsinki, Finland's Danger Johnny Studios and was produced by CHILDREN OF BODOM and Mikko Karmila, who worked with the band on their earlier albums "Halo Of Blood", "Hatebreeder", "Follow The Reaper" and "Hate Crew Deathroll". The CD was mixed and mastered at Finnvox Studios in Helsinki, Finland.

CHILDREN OF BODOM in May announced the departure of the band's guitarist of the past decade, Roope Latvala.