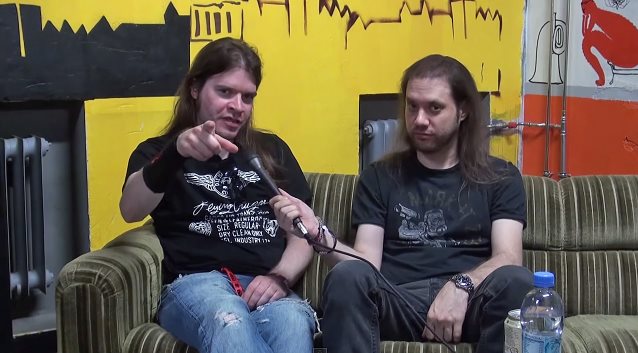 Kaaos TV conducted an interview with CHILDREN OF BODOM and WARMEN members Janne Wirman and Antti Wirman at the Tuska open-air festival in Helsinki, Finland on June 28. You can now watch the chat below. A couple of excerpts follow (transcribed by BLABBERMOUTH.NET).

On when they realized that they needed to part ways with guitarist Roope Latvala:

"We realized before… We started recording the new album ['I Worship Chaos'], I think, early April, and right before that, we realized that he will not be a part of the recordings. So that's when things started happening."

On whether it was obvious that they would choose Antti Wirman to fill the guitarist slot in CHILDREN OF BODOM:

"No, it wasn't obvious, but then, when we thought that, 'Okay, now we need to find somebody quick, and it would be better for us that we all know the guy,' so that we wouldn't just have to pick somebody from somewhere, and whatever. And also, you need to be skilled enough to play the fucking songs, 'cause some of them are fuckin'… Hmmm, well, I blame Alexi [Laiho, CHILDREN OF BODOM guitarist/vocalist and main songwriter]. We both do. I mean, all of my problems… it's always Alexi. So, yeah, we quickly realized the easy, logical choice was to go with [Antti]."

On the musical direction of CHILDREN OF BODOM's upcoming album, "I Worship Chaos":

"Well, I don't know… I think it's a bit different. Everybody who's heard it so far has said it's way darker, and it has a darker atmosphere. So… It's different. It's always different. C.O.B. does not wanna release the same album over and over again, so we try to do something different every time."

On the cover songs CHILDREN OF BODOM chose to include on the digibook version of "I Worship Chaos" — "Mistress Of Taboo" (PLASMATICS), "Danger Zone" (KENNY LOGGINS) and "Black Winter Day" (AMORPHIS):

"[We picked them] very randomly, like always. We just… Everybody has an idea and then we check them and try different things. We even recorded more songs, but some of them didn't work out. Usually we just have to make them work, even though they wouldn't work out. But now, this time, we had a couple of other ideas that we realized are not gonna be so good, so we were lucky enough to have three working versions."

"No, it definitely was not a label thing. We came up with it, and we decided… we talked to those guys, and we decided it could be a nice challenge… We challenge them to do a cover, and vice versa. So, yeah, I know I know it kind of sounds like a label idea, but it was not."

On how CHILDREN OF BODOM chose AMORPHIS's "Black Winter Day" to cover on "I Worship Chaos":

"We were listening to some of their early stuff and just decided that this song would transform into a C.O.B. version more naturally than some of the other stuff."

"I Worship Chaos" will be released worldwide on October 2 via Nuclear Blast. The artwork for the CD was created by Finnish artist Tuomas Korpi.

"I Worship Chaos" was once again recorded at Helsinki, Finland's Danger Johnny Studios and was produced by CHILDREN OF BODOM and Mikko Karmila, who worked with the band on their earlier albums "Halo Of Blood", "Hatebreeder", "Follow The Reaper" and "Hate Crew Deathroll". The CD was mixed and mastered at Finnvox Studios in Helsinki, Finland.