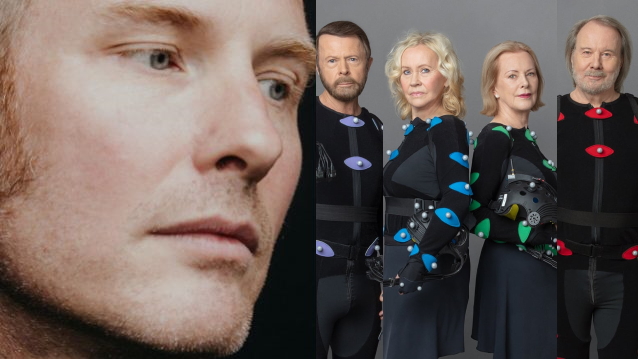 SLIPKNOT's Corey Taylor spoke to The New York Times about his love for Swedish pop superstars ABBA, who made a surprise announcement in September that they would release their first new album in 40 years.

"Growing up in the '70s, there was such a weird amalgam of music all over the place," he said. "I had Elvis; I had Motown; I had weird disco. Through all of that, I remember hearing ABBA's music. It seemed like it was always on, and it was clearly different from everything else. It had this full-spectrum lush production that felt and sounded big. It was only four people, but those songs sounded like there were a thousand people being recorded. The math didn't add up to me."

As for his favorite ABBA song, Taylor said: "'Take A Chance On Me' was always my jam. I love the juxtaposition; the beginning sets the whole tone for the song, with this weird Gregorian monk-like chant going on, and all of a sudden the crazy European production kicks in. The modulation in those songs is beautiful; it hooks you in, the way it plays between the major and the minor. I just love the yearning feeling. When you put it on, I'm instantly in a good mood."

ABBA was originally formed in 1972 and became massively successful after winning Eurovision in 1974 with hit single "Waterloo" and releasing 11 albums. The group split in 1982 after its respective couples, Agnetha Fältskog and Björn Ulvaeus and Anni-Frid Lyngstad and Benny Andersson, both divorced.

ABBA's new album, "Voyage", will be released on November 5. An immersive digital stage show will begin on May 27, 2022 at at the ABBA Arena, which is a state-of-the-art 3,000 capacity venue located at the Queen Elizabeth Olympic Park in London. The concert will feature ABBA's best-loved hits from throughout the years plus two new tracks, "I Still Have Faith In You" and "Don't Shut Me Down".