British extreme metallers CRADLE OF FILTH will return to North America once again to promote their latest album, "Cryptoriana - The Seductiveness Of Decay". For the second leg of its North American onslaught, the band has enlisted industrial/metal shock rocker WEDNESDAY 13 as well as theatrical metal newcomers RAVEN BLACK.

Comments CRADLE OF FILTH vocalist Dani Filth: "As a band, we are very much looking forward to the upcoming second leg of our U.S./Canadian 'Cryptoriana' world tour. The first, at the beginning of last year, was such a success that we decided to come back armed with a bigger, better show coupled with two awesome bands in support. We can’t wait to bring the noise back to our favorite hunting ground! Ia! Ia! Cthulhu Fhtagn!"

Released in September 2017, "Cryptoriana - The Seductiveness Of Decay" was recorded at Grindstone Studios, Suffolk, U.K. by Scott Atkins, who has been the resident go-to producer for CRADLE OF FILTH for several albums.

Earlier in the year, Filth told Rock Sins that CRADLE OF FILTH has commenced writing material for the follow-up to "Cryptoriana - The Seductiveness Of Decay" album. "We've got some really good ideas and we need to sit down and work on them, but they're really fresh and exciting; I'm excited by it," he said. "Obviously it's going to be very different from the last two records. I think we pushed that envelope as far as we could go, and I think the next one is going to be a bit of an eye opener. I think we are going to do a lot more shorter songs, and we are going to experiment a lot more, but I think there's going to be a lot of things where people go, 'Fuck me! That's intense!' I mean, we know what works. Like when we were on Sony and everybody was expecting us to be the next BACKSTREET BOYS and we brought out a 78-minute-long album that was literally falling off the edge of the CD, that was probably the most extreme thing we ever did and I'm proud of that, and I'm proud of the fact that we spent £180, 000 on the album [laughs] and got this massive orchestra because I think that was the last time any money was spent in an extreme market, on being that exotic, and I'm all about that."

Asked what it is about the current CRADLE OF FILTH lineup that makes it so special, Dani said: "It's because everyone is so into the band and there's no egos; we treat each other like idiots and with respect. We spend a lot of time together. Tonight I'm going to stay at Rich's [Richard Shaw, guitar]. Lindsay [Schoolcraft, keyboards] has been there for a week, then we're going to go walking around mountains with him in the summer. We just spend a lot of time together. When we write, we go over to the Czech Republic. I stayed over at Lindsay's in Oshawa in Canada. We're just good friends. It's kind of like a Trivial Pursuit piece — everyone has their own little triangle and it forms a good hub. I mean, the whole ego thing, that fact that people can talk to each and see the benefits we get, everybody is available to do stuff.

"There was always this whole miasma about me being a tyrant, and it never was — it was always people making that up, because they couldn't get their views across and I don't know why," he added. "And now everybody is cool with each other, everyone's got their own place and everyone knows what they're doing. People come up with great ideas and you go, 'Fucking hell! That's great. We've gotta do that,' whoever comes up with it, so we're comfortable with ourselves." 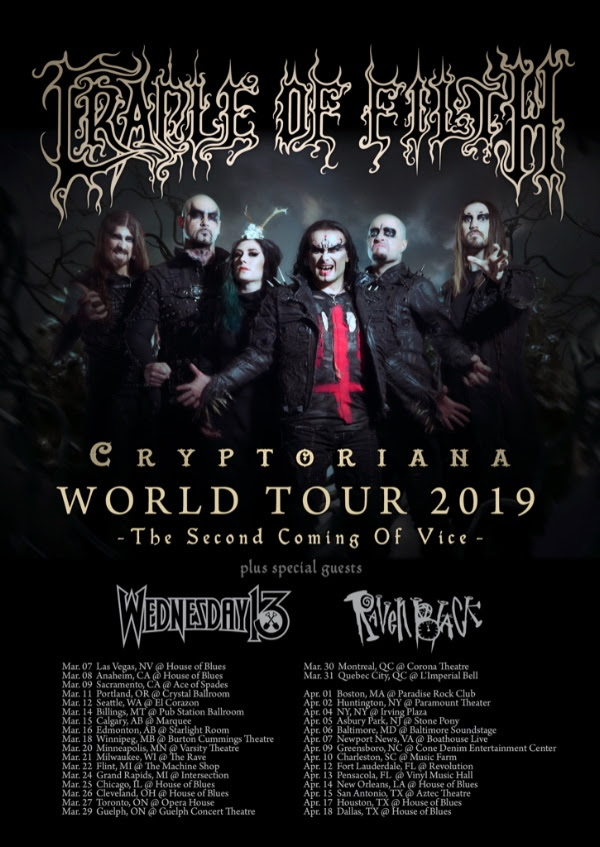