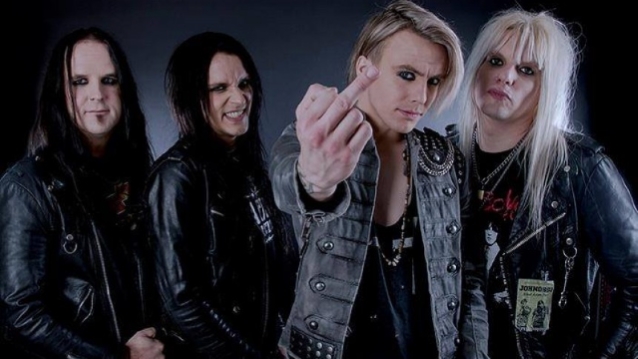 Swedish sleaze outfit CRASHDÏET has released the official music video for the song "Reptile". The second CRASHDÏET track to feature the band's latest addition, singer Gabriel Keyes, was recorded at the group's own Dïet Studios in Stockholm, Sweden. It was produced by lead guitarist Martin Sweet and mixed by longtime collaborator Chris Laney.

The "Reptile" video was shot and directed by Jimmy Johansson and Martin Sweet.

A special crowdfunding campaign will be launched to finance the recording of the new CRASHDÏET studio album, which will be the band's fifth LP and follow-up to 2013's "The Savage Playground". You can sign up at www.crashdiet.org/newsletter to get the latest news on the campaign as well as a free MP3 and WAV of "Reptile".

CRASHDÏET will perform at the annual Bandit Rock Awards, where the band is also nominated for "Best Swedish Live Act."

In December 2017, CRASHDÏET released its first new song with Keyes, "We Are The Legion".

"The Savage Playground" entered the official chart in Sweden at position No. 2. The CD was released in January 2013 via Frontiers.