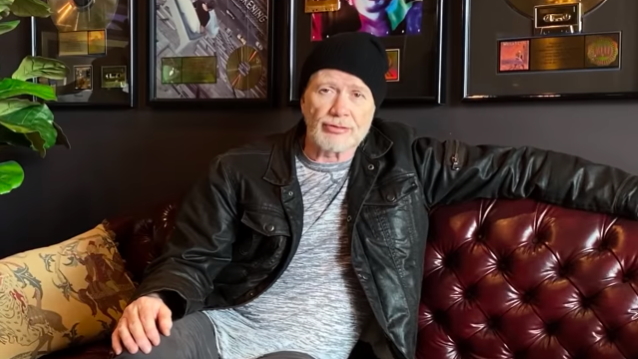 MEGADETH mainman Dave Mustaine has urged the band's fans to do their part in keeping everybody healthy while they are at home due to the coronavirus pandemic.

Last night, Mustaine released a video message via the official MEGADETH YouTube channel in which he said: "Hey, it's Dave Mustaine from MEGADETH. I just wanted to check in with all of you guys and see how you're doing during the quarantine. I hope you guys are taking the time to stay indoors and quarantine yourselves and especially take time to wash your hands a lot. Me, I've been staying indoors — I'm on Day 12 right now — and I've been washing my hands a lot and listening to a lot of MEGADETH music, putting the final touches on a new book and working on the new MEGADETH album. And looking forward to doing our next tour, once this is all over…

"I just wanna thank you guys for following us, and check back regularly at Megadeth.com to see what's going on with us. Until then, wash your hands a lot, stay safe and see you soon."

"Building The Perfect Beast" details the making of MEGADETH's iconic record 'Rust In Peace', which was released in 1990, at an incredible time of flux and creativity in the rock world. Relayed by Mustaine, the book covers the process of hiring the band and supporting cast, of trying to handle the ensuing success, and ultimately the pressure of fame and fortune — which caused the band to finally break up before reforming a couple of years later.

Mustaine spent most of 2019 receiving treatment for throat cancer with which he was diagnosed last May.

MEGADETH's next LP will be the first to feature drummer Dirk Verbeuren (ex-SOILWORK), who joined the band almost four years ago.