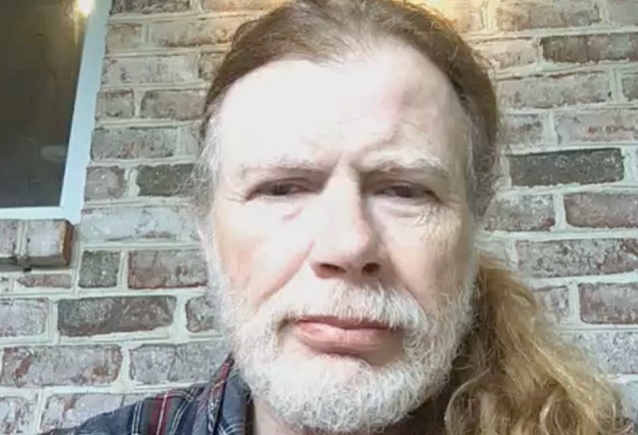 Dave Mustaine says that there is no chance of David Ellefson ever rejoining MEGADETH again.

Mustaine addressed the possibility of his longtime bandmate returning to MEGADETH while filming a new video message on Cameo, which lets users hire celebrities to record brief, personalized video messages about virtually any topic.

Asked by Rock Feed if Ellefson could once again play with MEGADETH at some point down the line, Mustaine said: "Any chance on Ellefson coming back later on? The answer to that is no."

Ellefson laid down his bass tracks on MEGADETH's sixteenth LP in May 2020 at a studio in Nashville, Tennessee. A short time later, he raved about his performance on the record, telling the 96.7 KCAL-FM radio program "Wired In The Empire" that his musical chemistry with MEGADETH drummer Dirk Verbeuren was comparable to the interplay between Geddy Lee and Neil Peart on classic RUSH albums. "I feel like on the new MEGADETH record, me and Dirk have those same moments," he said. "It's MEGADETH — it's not RUSH, obviously — but in the field of what we do, there were these moments that I was just going, 'Oh, my God.' This is me as a kid going, 'This is my Geddy/Neil moment right here.'"

Last month, Mustaine announced during an episode of his Gimme Radio program "The Dave Mustaine Show" that Ellefson's bass tracks would not be used on the new MEGADETH LP. He has since revealed that a mystery bassist has already re-recorded Ellefson's parts for the album, which is tentatively due before the end of the year.

Ellefson was dismissed from MEGADETH in late May, just days after sexually tinged messages and explicit video footage involving the bassist were posted on Twitter. The longtime MEGADETH member later released a statement on Instagram denying all social media chatter that he "groomed" an underage fan. He also filed a report with the police department in Scottsdale, Arizona alleging unlawful distribution of sexually explicit images of Ellefson by unknown offenders. In the report, Ellefson admitted that he had been exchanging sexual text messages with a Dutch teenager, who captured a video of several of their virtual "masturbating encounters" without his consent and shared them with friends. (According to Ellefson, the woman was 19 at the time of their first virtual sexual encounter.) The 56-year-old Ellefson, who lives in Scottsdale, first became aware of the video on May 9, when the claim "David Ellefson of MEGADETH is a pedophile" appeared on Instagram. Ellefson told police he was notified on May 14 by MEGADETH that the band would be parting ways with him. Three days later, he was fired.