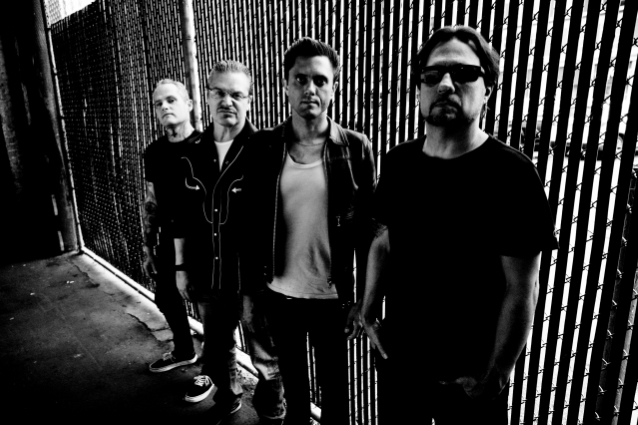 DEAD CROSS broke the news of the latest recording sessions in a tweet on Wednesday (December 4). The band wrote: "We are happy to announce that tracking for Dead Cross LP #2 has now begun."

DEAD CROSS's upcoming effort will be the group's first since Crain announced he was cancer-free after undergoing chemotherapy and radiation for squamous cell carcinoma, the second most common form of skin cancer. He wrote in a recent social media post: "I can't express enough gratitude to my friends, family, supports and fans! Now that all the chemo and radiation has left my body I'm slowly starting to feel alive again."

Patton told Rolling Stone that he got involved with DEAD CROSS after reaching out to Lombardo to see if he could release the band's album on Ipecac. After getting a text from the drummer asking him to join the group, "my jaw dropped," the singer said. "I was like, 'Who, me? Hmm …' And I think it took like all of 30 seconds, but in a sarcastic way, I'm like, 'Yeah, of course. I can do this. Are you sure you want me?' So I kind of second-guessed him a little bit. And he said, 'Man, you'd be our dream vocalist.' And then it was just a matter of logistics. I decided to record it here in my basement, which is fitting. It shouldn't sound too polished."

Regarding DEAD CROSS's musical direction, Patton said: "To me, it is a traditional hardcore record. It is very pointed, direct and visceral. Like, I wasn't going to play keyboards, add samples or any kind of orchestration. It was like, 'Yo, just go for it.' In some ways, it reminded me of stuff that we had collectively all grown up with and loved when we were like teenagers — bands like the ACCÜSED, DEEP WOUND or SIEGE, stuff that was just brutal, uncompromising and right to the point. I was listening to all those bands again before this came to be, so it was already back infused in my blood. And now I got a chance to do a pencil-in-your-eye record."