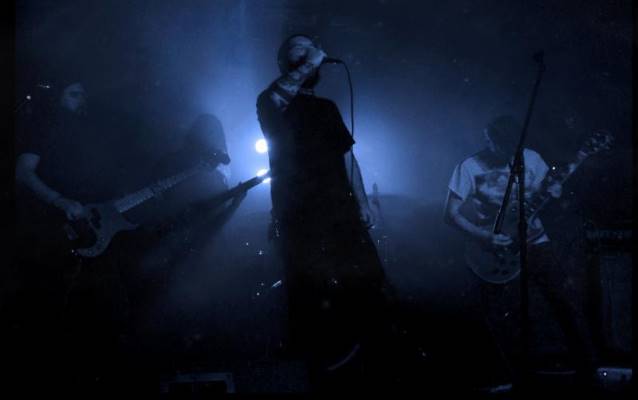 Dallas, Texas-based blackened doom congregation DEAD TO A DYING WORLD will enter the studio in the near future to record the band's sophomore full-length release. The group is preparing to record this time with renowned sonic decimation engineer Billy Anderson (SLEEP, NEUROSIS, MELVINS), who will undertake the arduous task of harnessing their massive sophomore album. The new opus, bearing the title "Litany", will take the band's already powerful chaos-driven approach to new chasms of sonic exploration, with enough material planned to fill two full 12-inch platters, as with their debut release. "Litany" will also feature collaborations and contributions from members of SABBATH ASSEMBLY, PINKISH BLACK and ECOCIDE.

"Litany" was developed with the themes of isolation, insanity, and reflection in a time of global devastation, evoking the cyclical nature of life, death, and rebirth; this new chapter reveals the aftermath of the self-titled release. From the ashes, we find three warring clans who personify each theme and embody their own unique struggles, each clan has sought their own way of survival in an unforgiving world, some in search for higher meaning, and others through methods of irrevocable cruelty. These concepts are explored individually and finally together, representing by synecdoche, our own struggles in modern society.

Founded in 2010, DEAD TO A DYING WORLD incorporates cello, violins, and upright bass elements and more into a morose but intimidating end-time style of doom, with a putrid, blackened weight to their waves of slow-motion, Apocalypse inspired doom dirges and a harrowing double-vocalist approach. With several tours in different regions of the countries since inception, the band's self-titled 2xLP album was produced by Phillip Cope of KYLESA and released via Tofu Carnage Records in 2011.

DEAD TO A DYING WORLD is: