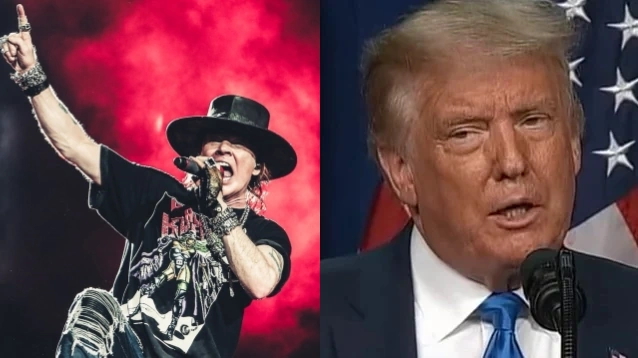 The president's unlikely praise was revealed in Sarah Huckabee Sanders's memoir, "Speaking For Myself: Faith, Freedom, And The Fight Of Our Lives Inside The Trump White House", which has been described by NPR as "an unabashed homage to Trump."

In the book, the the former White House Press Secretary writes that America's 45th president originally wanted the 1991 rock anthem to be placed on his rally playlist back in 2018. Trump went as far as to tell Sanders that the clip was "the greatest music video of all time" and made her watch it with him in the Oval Office to prove his point, even though she hadn't disagreed.

Trump eventually got his wish, and "November Rain" was finally played last Thursday (September 10) at a campaign event in Michigan.

GUNS N' ROSES singer Axl Rose has frequently spoken out against the Trump administration, including in July, when he defended his right to voice his political opinions, saying that he feels an "obligation to say something" about the "irresponsibility of this administration."

In late 2018, when Trump neglected climate change and accused poor forest management as the cause of the California wildfires while threatening to cut federal financial relief, Rose pointed fingers at Trump as the "root" of the problem and said that "only a demented n' truly pathetic individual would twist that around n' use a tragedy to once again misrepresent facts for attempted public/political gain at other's expense."

Back in November 2016, Rose took to Twitter to condemn then-President-elect Donald Trump's choice for U.S. attorney general, and to berate Trump for demanding an apology from the cast of the Broadway show "Hamilton" after then-Vice President-elect Mike Pence was booed when he attended the musical. One month later, Rose invited fans at a GUNS N' ROSES concert in Mexico City to beat the crap out of a large piñata designed to look like Trump.

In January 2018, Axl blasted the Trump administration as the "gold standard of what can be considered disgraceful."

“November Rain” played at Trump Michigan rally tonight. @SarahHuckabee writes in her book about how Trump added it to the playlist in 2018 and made SHS and Hope Hicks watch the Guns n Roses video in the Oval Office because it was the “greatest music video of all time.” pic.twitter.com/67T2veDdoS