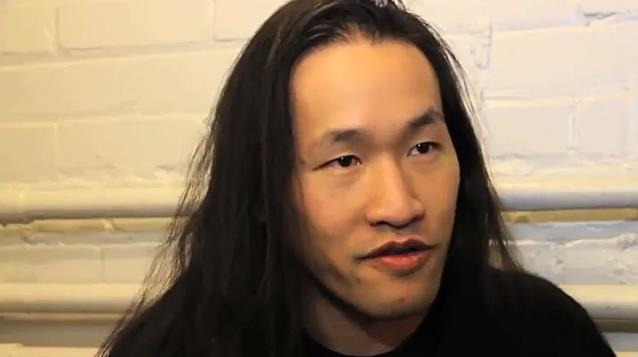 Radiosuicide Photography's RSPTV conducted an interview with guitarist Herman Li of British epic power metallers DRAGONFORCE on August 10 at the Getaway Rock festival in Gävle, Sweden. You can now watch the chat below.

DRAGONFORCE is recording the follow-up to last year's "The Power Within" album, which was the band's first with vocalist Marc Hudson. Since his live debut with the group in July 2011, Marc has gone on to front over 100 shows with DRAGONFORCE in 32 countries across the globe, including arenas with IRON MAIDEN as well as a mammoth headlining world tour to support the CD.

With a newfound wealth of experience for the new singer and two years of playing together, the DRAGONFORCE machine was at its most powerful when it entered Fascination Street studios in Örebro, Sweden in May with Jens Bogren to start laying down tracks. Known for his work with the likes of OPETH, THE DEVIN TOWNSEND PROJECT, AMON AMARTH, KATATONIA, SOILWORK and SYMPHONY X, to name a few, Jens will undoubtedly help DRAGONFORCE make a killer-sounding album.

"The Power Within" sold 5,800 copies in the United States in its first week of release to debut at position No. 74 on The Billboard 200 chart.