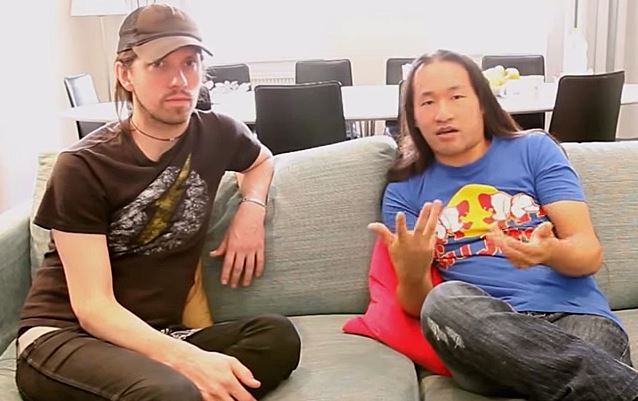 Greg Prato of Songfacts recently conducted an interview with guitarists Sam Totman and Herman Li of British epic power metallers DRAGONFORCE. A couple of excerpts from the chat follow below.

Songfacts: In DRAGONFORCE, what would you say is more important, songwriting or the soloing?

Sam: Definitely the songwriting, for sure. But at the same time, everything counts. I always tell people I definitely spend a lot more time writing a song than writing guitar solos. Obviously, I still spend a lot of time on the guitar solos, but nothing close to the amount of time I spend actually getting the song right first — getting the vocal lines good and getting the structure in place. Guitar solos always come last. Not to say that they don't count, because, of course, they do. But a great guitar solo is nothing unless it's in a good song. To me, anyway.

Songfacts: Who would you say are your favorite guitarists as far as influences and also modern-day guitarists?

Herman: My favorite guitar players are usually the solo artists, so Steve Vai, Joe Satriani, those kind of guys — instrumental guys — I really like. No one can argue with me that those guys are not inspirational or a big influence on the rock music and electric guitar of the last, I don't know how many years.

Sam: I never got into those guys so much, even though I think they're amazing players. But I didn't find the songs that catchy. I was more into the bands, mainly. Say, IRON MAIDEN, for example, I thought the songs were really great. But I also thought the guitar playing was cool, too. So those guys were definitely a big influence in the beginning. But, there's so many guitar players out there that are really good. I was never a huge fan of EXTREME, but I thought Nuno Bettencourt was really amazing. We went and saw him the other day, actually. We hadn't seen him play for a while, and were just really blown away. So I'll get influences from guys like that, though I might not necessarily listen to their albums all day long. But you can still appreciate them. There's so many great people out there. I really like Chuck [Schuldiner] from DEATH and James Murphy on that "Spiritual Healing" album. I thought they played really well together. There's just too many to list off, really.

Read the entire interview at Songfacts.