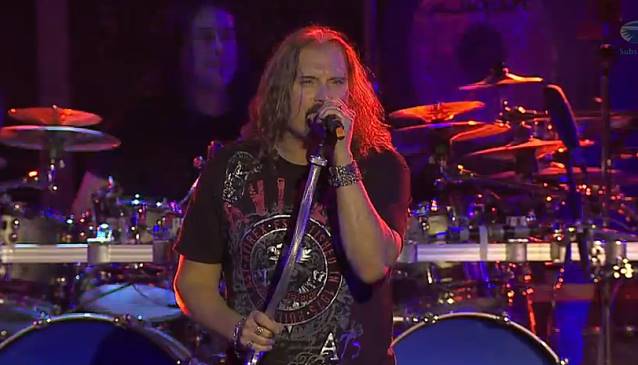 "Dream Theater: Live At Luna Park", the new concert film from progressive metal giants DREAM THEATER, sold around 6,600 copies in the United States in its first week of release to debut at position No. 1 on the Top Music Videos chart.

"Dream Theater: Live At Luna Park" came out on November 5 via Eagle Rock Entertainment on 2DVD, Blu-ray, visual digital formats and a deluxe edition. The deluxe edition is an 11.5-inch square 60-page hardback photobook containing the Blu-ray, 2 DVDs and 3 CDs presenting all the key physical formats in one release; the CDs are only available in this deluxe edition.

These releases boast the 160 minute main show — accompanied by a wealth of bonus material — and feature many of the band's classic tracks, including "Metropolis Pt. 1", "The Silent Man", "Pull Me Under", "The Root Of All Evil", "The Test That Stumped Them All", "The Spirit Carries On" and the recent "On The Backs Of Angels".

DREAM THEATER began their mammoth "A Dramatic Tour Of Events" world trek in July 2011 with the final leg in South America taking place in August 2012. It was here at the Luna Park Arena in Buenos Aires, Argentina, that they decided to film the two nights that make up this DVD release.

The "Live At Luna Park" band lineup for this show is James LaBrie (vocals); John Petrucci (guitar); Jordan Rudess (keyboards); John Myung (bass); and Mike Mangini (drums). This was DREAM THEATER's first tour and album with their new drummer and all the tracks from that album, "A Dramatic Turn Of Events", are included in either the main show or the bonus performances.

The bonus features offer live versions of six great tracks: "These Walls"; "Build Me Up, Break Me Down"; "Caught In A Web"; "Wait For Sleep"; "Far From Heaven"; and "Pull Me Under". Also on "Live At Luna Park" is a documentary, the trailer for the cinema release of the film, a "behind-the-scenes" feature and the cartoon intro that ran on big screens prior to the band taking to the stage in Buenos Aires. The Blu-ray additionally features six multi-angle options on "Outcry".