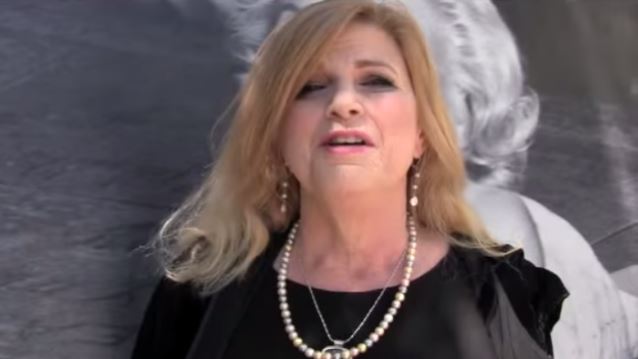 Vicky Hamilton, who is best known for managing the early careers of GUNS N' ROSES and POISON, in addition to serving as a management consultant for MÖTLEY CRÜE, has launched a crowdfunding campaign for the release of her memoir, titled "Appetite For Dysfunction".

Says Vicky: "I have been writing this book for seven years. While I was living it, I was as high as the bands I was working with. So in recounting the stories and going through the pictures, I really thought about what I was saying and feeling about these experiences and was really wanting to bring my true story of the '80s music scene to the page. I feel I have accomplished my goal.

"Though I have had a very rich rock experience, I didn't make the money I would have liked, so I have chosen PubSlush to help me raise the money needed to put the finishing touches on the book.

"I have finished writing the book, but it needs a professional edit, the book needs to be laid out by a professional. I need to pick the pictures, pay photographers for thier usage and make sure everything is nice and legal. I want to pay artist Maxine Miller to do a painting for the cover art. Once the package is complete, then I need to print the books.

"Once the book is in print and ready for sale as an ebook, I want to promote the book through social media channels and hire a PR firm. I would love to do book signings and readings around the world."

In the book "Watch You Bleed: The Saga Of Guns N' Roses" by Stephen Davis, Vicky stated about what it was like dealing with GUNS N' ROSES lead singer Axl Rose during the band's early days: "He was so damaged. Today you'd call it bibolar. He was either childlike, or a dog from hell. I loved him dearly, but I also felt sorry for him because he could not trust anyone and already had big issues with paranoia and control."

She added in a separate interview with Rolling Stone: "[Axl] has this very likable little-boy personality, and then he has the demon-dog-from-hell personality. The color of his eyes actually changes when he goes into this different person."

After helping GUNS N' ROSES land a record deal with Geffen, Hamilton had a falling out with the group "because I had borrowed $25,000 for the band from Howie Hubberman [a vintage guitar expert who formerly owned Guitars R Us, a highly revered guitar store located on the Sunset Strip], and that was not included [in the deal with Geffen]," she told the Metal Sludge web site. "Howie was looking at me to get paid back, and every month the guys in the band would say, 'Yeah, we'll handle it.' But they never did, and I was not going to be left holding the bag for $25,000, so I eventually had to sue them. It was kind of ballsy, but I had to do it."

She continued: "The statute of limitation was running out, so I hired a litigator who served [then-GUNS N' ROSES guitarist] Slash in front of the Cathouse one night. I actually wound up getting $35,000, which was $25,000 for Howie Hubberman, $5,000 for the lawyer and $5,000 for me to get a new apartment because that was never included before."

Original GUNS N' ROSES drummer Steven Adler later said: "Vicky Hamilton — awesome woman! I wanted her to be part of it after we signed — because she got us signed. What happened was not my idea, and I did not have enough say-so in it [to do anything about it]."

Added Slash: "We lived at her house, and she busted her ass twenty-four hours a day. She couldn't pay her rent because she spent all the money she could get her hands on trying to get us off the ground. She was the only person that — way back when we were doing our first gigs — she'd say, 'You guys are great, you're gonna make it. ' I've gotta tip my hat to her."