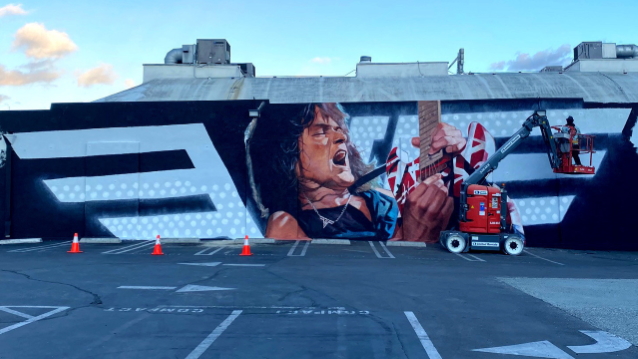 Guitar Center, the world's largest musical instrument retailer, has unveiled a new mural of Eddie Van Halen on the outside wall of its flagship Hollywood, California store located on the famous Sunset Strip. With January 26, 2021, marking the late guitar legend's 66th birthday, renowned muralist Robert Vargas teamed with Guitar Center to pay tribute to the legacy of Van Halen with this striking mural, which depicts Eddie playing his iconic "Frankenstrat" guitar. Vargas donated his time and talent to design and create the mural, which measures approximately 17 feet tall x 105 feet long and covers the entirety of the store's outer wall at its rear entrance.

Vargas remarks: "Eddie was one of my creative heroes. When I was young, the debut VAN HALEN record was the first album I ever owned. He influenced me over the years in so many different ways. As soon as the news hit of his passing, I knew I had to do something creative to memorialize him, and Guitar Center was the obvious venue. Right here on the Sunset Strip, where the band made their bones – I can't think of a better place for this tribute to him, and I thank Guitar Center for giving me the canvas to share it with the world."

Guitar Center's Hollywood location has a history of paying tribute to Eddie Van Halen, with Eddie's handprints being a centerpiece and main attraction of Guitar Center's iconic RockWalk outside the store, along with several of his prized instruments and other memorabilia on display behind glass.

Jean-Claude Escudie, Guitar Center category manager, notes: "Eddie Van Halen was a truly monumental force in rock music. He made lead guitar playing popular when it might have been slipping away into punk and new wave minimalist territory, and then basically the entire 80s hard rock scene followed in his wake. Guitar Center saw this first-hand, as generations of lead guitarists have flocked to our stores to try to capture something of what inspires them about Eddie's sound. Besides that, sometimes people forget that he was an immigrant and multi-racial, so in so many ways his story is the story of the American experience."

When people experience the mural, Vargas wants them to see Eddie "in his full glory" and feel like anything is possible. He continues: "When you work hard at something, you can reach your full potential. Be true to your art, and your art will be true to you. I had the chance to meet Eddie a few years back, and because he and I connected on the nature of art and creativity, painting him here is therapeutic. Thank you, Guitar Center for allowing me to use my creative process to connect with him one more time and share it with the world."

In addition to the monumental Eddie Van Halen mural on the flagship Guitar Center Hollywood store wall, the store also features a Jimi Hendrix mural, unveiled November 3, 2018, in tribute to the musician. Outside the entrance to the store are concrete blocks bearing the signatures and handprints from more than 150 notable musicians (including Van Halen), producers, iconic bands, and music instrument manufacturers which have been recognized for achievements with induction into the world famous RockWalk.

You can visit Guitar Center's Instagram page or YouTube channel throughout the day to watch behind-the-scenes video of the Eddie Van Halen mural coming to life at the Hollywood flagship store and follow @TheRobertVargas on Instagram to see more of Robert's murals.

Vargas is a contemporary artist known for his mixed-media portraits, murals and live events. Born and raised in the Los Angeles neighborhood of Boyle Heights, his best-known works include a City of L.A. commissioned mural "Can't Stop" of legendary SUICIDAL TENDENCIES frontman Mike Muir. He sees his public mural works both in Los Angeles and throughout the world as a means to reach a wider audience and promote accessible art and community through the creative process.

This is not the first mural that has been created in honor of the iconic musician. Less than a month after Eddie's death, airbrush artist Paul Archer painted an Eddie Van Halen mural on the back wall of Archer Airbrushing shop in Victoria, British Columbia, Canada.

Eddie passed away in October at the age of 65. His death was announced by his son, VAN HALEN bassist Wolfgang Van Halen.

Eddie died at Providence Saint John's Health Center in Santa Monica, California. Following his death, fans left flowers at his childhood home on Las Lunas Street in Pasadena, California. Additional flowers, candles and fan mementos were placed on Allen Avenue where Eddie and his brother, VAN HALEN drummer Alex, scratched their band's name into the wet cement of a sidewalk when they were teenagers.

In October, a City Council meeting was held in Pasadena, where a memorial honoring Eddie was discussed. City manager Steve Mermell was directed to come up with ideas for how to best honor the musician.