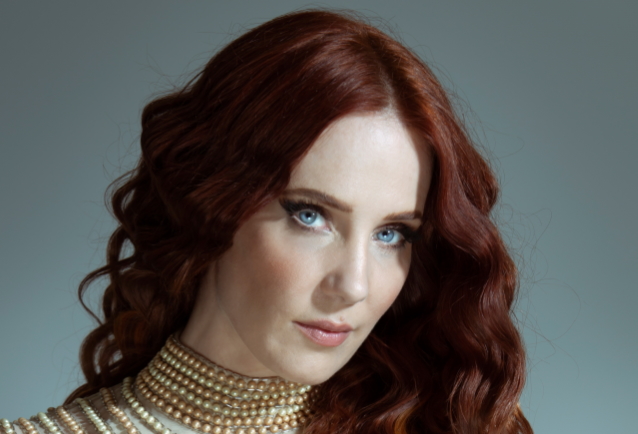 Vocalist Simone Simons of Dutch symphonic metallers EPICA spoke to the "Scars And Guitars" podcast about what the concert industry might look like post-pandemic. She said: "You have to be realistic. Of course, we're all eager to go back on stage, but we all know by now that the art industry, the music business, entertainment business, is the last to start working again. And a lot of musicians are going crazy, especially the ones that live for touring."

She continued: "You have two kind of musicians: one that love to be in the studio — like my husband [KAMELOT keyboard player Oliver Palotai]; he loves it — but I also love to travel and be on stage. If I'm in the studio for too long, it's too much of the same for me. So I am itching to go back on tour, and some musicians are not. I know a couple of my close friends in the music business, they are also — you see that everybody is kind of venturing out into new directions, trying to keep themselves busy creatively, but we all have this big loss, or we miss something, that nothing, actually, can replace except for being on stage."

Asked if she and her bandmates have thought about different ways they will use modern technology to reach people during the pandemic, Simone said: "Some of our colleagues have started doing streaming concerts, and we are checking the options for us. The extra difficulty that we have is that we live in four different countries, and as long as we have lockdowns, we can't get together in order to create something like that. But the [new EPICA] CD is going to be released in February. Originally, our first postponement of the tour would have been in March, and that is, again, postponed to 2022, January. But we want to, of course, represent the album, and we have to be flexible and go with, like you say, the technology that we have now and try to come up with something really amazing for the fans."

EPICA will release its new album, "Omega", on February 26 via Nuclear Blast. The follow-up to 2016's "The Holographic Principle" was once again produced by Joost Van Den Broek (POWERWOLF, AYREON) in part at Sandlane Recording Facilities in Rijen, Netherlands.

In the fall of 2019, EPICA celebrated the 10th anniversary of its milestone album "Design Your Universe". To mark this special occasion, EPICA re-released this fan-favorite LP as a "gold edition" through Nuclear Blast. This edition contained the album remixed and remastered by Joost Van Den Broek with updated artwork and a second disc containing newly recorded acoustic versions of "Design Your Universe" songs.

November 2019 saw the release of "The Essence Of Epica", a lavishly designed and fully illustrated, high-quality hardback which tells the story of EPICA in bandmembers' own words. The book is available in two distinct editions: the Classic is a 208-page, hardback with foil detailing, filled with over 200 images; the Signature hardback is signed by the band and comes in a deluxe clamshell box with three exclusive, original art prints created by Stefan Heilemann.