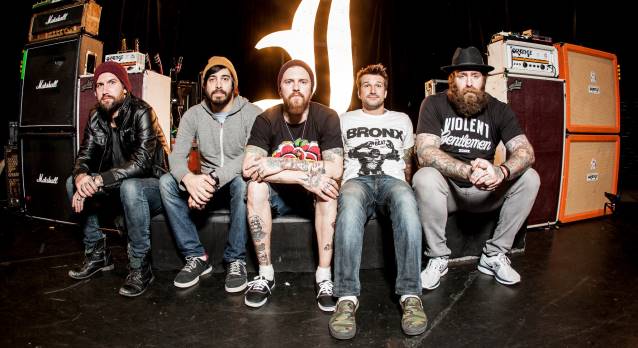 New York's EVERY TIME I DIE is currently recording new material at GodCity Studio in Salem, Massachusetts with producer Kurt Ballou of CONVERGE.

Keith Buckley, EVERY TIME I DIE lyricist and vocalist, states: "Kurt Ballou had always intimidated the living shit out of me, so I was overjoyed when the decision was made to record our next record with him at GodCity, and I mean that sincerely. I've been a fan of his work for over a decade. His records are terrifying and moving and they sound like they were written and recorded under great duress, which is exactly how this style of music should be made. This month we join the pantheon. I couldn't be more excited to see what he helps us learn about our own band that we didn't realize for the past 15 years."

Immediately following the recording process, EVERY TIME I DIE hits the road for the entirety of Vans Warped Tour 2014.

EVERY TIME I DIE's latest album, "Ex Lives", sold around 14,000 copies in the United States in its first week of release to debut at position No. 25 on The Billboard 200 chart. The CD was helmed by renowned heavy rock producer Joe Barresi (THE MELVINS, QUEENS OF THE STONE AGE, PARKWAY DRIVE). This was the band’s highly anticipated follow up to their 2009’s raging masterwork "New Junk Aesthetic", which Absolute Punk heralded as a musical "weapon of mass destruction."