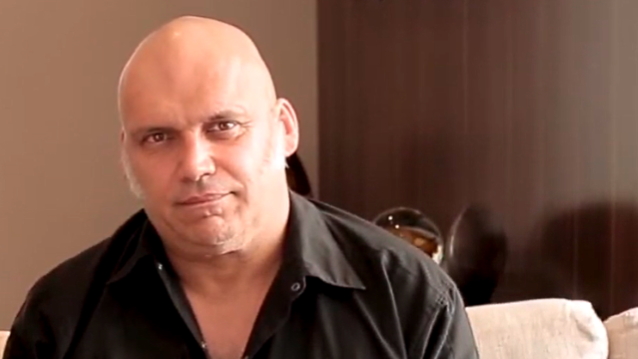 British heavy metal vocalist Blaze Bayley, who fronted IRON MAIDEN more than 20 years ago, was recently interviewed by Brazil's Metal Domination. You can now watch the chat below.

Asked what has kept him motivated to keep going for so long as a solo artist, Blaze said: "I am very lucky. I have wonderful fans that, when I really thought, 'Am I good enough? Should I continue?' they would sent me e-mails, and I would see an e-mail, 'Blaze, please make another album.' 'Blaze, please return to Brazil.' 'Blaze, we love you. We want you to go…' And it would give me the confidence to go, 'Well, maybe I can make another album.' And since those days when I started, I've made 11 studio albums and I've been to Brazil many, many times. And it is part of that feeling and that spirit that I share with my fans in Brazil that make it possible for me to continue. Sometimes it's difficult, and when I need inspiration, I think of my tours in Brazil with IRON MAIDEN, my solo tours, my tours acoustic.

"I'm completely independent," he continued. "I'm not crowd funded. I have no big record company. I am funded by Blaze Bayley fans. When my fan buys my CD, I get the money and I make the next CD. No one else is involved — it's me and my fans. And so at every concert, I like to have a free meet-and-greet so that I can say 'thank you' personally to every fan."

Bayley will release a new studio album in March 2021. Blaze and guitarist Chris Appleton have already putting together new material and early reports from the singer are that the results so far are "very exciting."