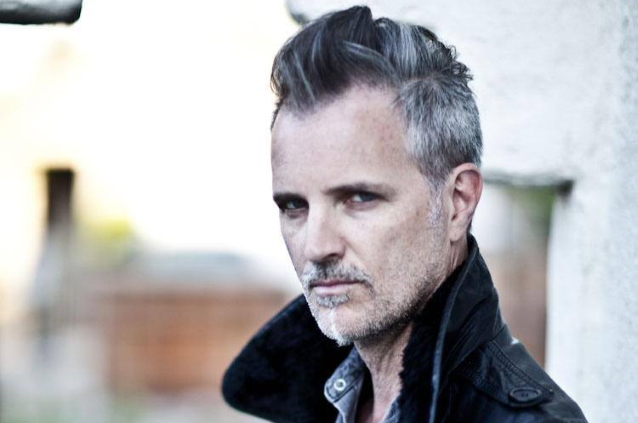 In a new interview with the "80's Glam Metalcast", former KIK TRACEE vocalist Stephen Shareaux recalled his experience auditioning for the singer position in MÖTLEY CRÜE following the departure of original frontman Vince Neil in 1992. He said (hear audio below): "I have a 28-year-old son. I just recently became a grandfather; I have a beautiful baby granddaughter. But when my son was a little older than her — about three or four — one of his best friends, and his mom's best friends, was Nikki Sixx's son Gunner. And so Jagger and Gunner were hanging out a lot, because my ex and [Sixx's ex-wife] Brandi Brandt were very good friends, and I was spending a lot of time at Nikki's house and at birthday parties and just whatever. We were just kind of spending a lot of time together. So one morning around 11 o'clock, I get a phone call from Nikki — this was when I used to wake up at 11 [laughs] — and he's, like, 'Hey, man. Vince just left the band, man. We were wondering if you wanna come down and check this thing out.' And I'm, like, 'Am I fucking dreaming? What is going on?' I was literally laying in bed. And, of course, [I said] yes.

"I grew up in the Midwest playing three to four sets of rock and roll and metal covers, and many of those included MÖTLEY CRÜE," he continued. "So to be able to go in a room with these guys was an absolute [thrill].

"I think no more than a week later after that phone call, I found myself near Burbank airport — massive room, walking in. 'Hey, man,' Tommy [Lee] yells out from behind his drums. And everyone just kind of doesn't move; they just all greet me as I walk in. I basically stepped into a circle of monitors, my own world. 'What do you wanna do?' 'Live Wire'. 'Sure, yeah.' [It was] the most intense, loudest rehearsal I've ever been in — it was just insane. But [it was] an incredible experience. I ended up hanging out for about probably three or four hours. We started working on tunes. Everything was recorded. We started writing some stuff. It was a fantastic experience."

According to, it became apparent very early on that he wasn't the right man for the job.

"When I left, I remember just vividly sitting in my car and the hair on my arms still kind of standing up from tingling — the volume and the energy," he said. "But there's something in me that just knew that wasn't something I wanted. It wasn't for me. That was enough. I'd come to learn that they only saw myself, [John] Corabi [THE SCREAM], I think Sebastian [Bach, SKID ROW] and, I believe, Marq Torien from BULLETBOYS. That one I can't confirm, but I think it was about four guys.

"A guy named John Greenburg who was handling John Corabi at the time, he kind of filled me in on the whole thing," Stephen recalled. "He said, 'Yeah, it was between you and Corabi.' Like I said, I knew that it wasn't for me. [Corabi] already fit the bill — he had the tatts. I still don't have one stitch of ink. It just wasn't my scene. And I'm not gonna go get ink just to be part… It wasn't my thing. And then the rest is history. He got the gig, and he was the right guy for the gig. But it was quite an honor to [play] with those guys."

Shareaux went on to claim that MÖTLEY CRÜE ended up using one of his lyrical ideas for a song that appeared on the band's self-titled album in 1994.

"I think one of the songs that's on there… Is there [a song called] 'Til Death Do Us Part', or something, on that record?" he said. "That's my title. I went to the bathroom. I came back. Nikki will tell you. He was thumbing through my lyric book, and it was open to that page… That song was written way before [my MÖTLEY CRÜE audition]… Anyway, I'll take credit for that. [Laughs]"

Shareaux released his debut solo album, "Golden", in 2013. A follow-up effort is tentatively due later this year.