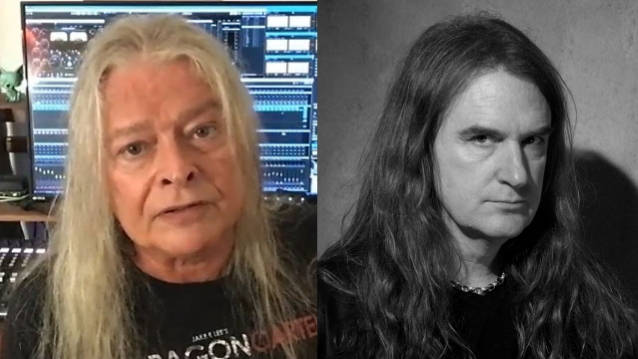 Former MEGADETH producer Max Norman has weighed in on David Ellefson's dismissal from the band, saying he understands Dave Mustaine's decision to part ways with the bassist.

The British-born knob-twiddler, who mixed MEGADETH's 1990 album "Rust In Peace" and produced 1992's "Countdown To Extinction" and 1994's "Youthanasia", addressed MEGADETH's split with Ellefson during a new interview with Canada's The Metal Voice.

Speaking about the fact that Mustaine fired Ellefson two weeks after the leak of the bassist's messages and sexually explicit videos featuring a woman who is not David's wife, Norman said (as transcribed by BLABBERMOUTH.NET): "The first thing I can say is my girlfriend sent me a link to the video. And I didn't know — but I can't unsee it now. That's the problem.

"I feel sorry for David. Look, he made a mistake," he continued. "It was a silly thing to do. I feel sorry for him. But I've got mixed feelings about it. And I understand Mustaine removing him from the band, because the one thing that Dave Mustaine will not tolerate is being made fun of. Because of his upbringing, I guess, and because of the way he is, I think he thought about this and thought about it. It's a brand — he has to protect the brand. And he probably was thinking — and I don't know this — but he probably was thinking, 'I can't go out on stage with this guy 'cause everybody's gonna be pointing at him and doing this.' [Moves his hand in an up-and-down motion.] You know what I mean? So I can't really blame him. But I see both sides of the story."

Regarding the allegation by a third party that Ellefson groomed a 19-year-old fan since she was 17, Max said: "I certainly don't think [Ellefson] is a pedophile. He's guilty of probably what 90 percent of the other musicians out there have done at one stage or another. But when you have that position and responsibility… It feels a little weird because he's a pastor, and so you've got this religious thing there as well.

"It can swing either way, and I see both sides," Max continued. "I don't wanna be judgmental about it. I feel sorry for David because I think it's gonna affect his whole life. And he has a lot of other stuff going on, and it's gonna affect that stuff too. So the guy's gonna go through a real hard time."

Norman, who described Ellefson as "a very nice guy," went on to offer a piece of advice to his former work colleague.

"If David sees this, maybe he'll do this — but I do think that he should apologize publicly to his wife and his family for the embarrassment," Max said. "And maybe to MEGADETH too. I don't know. If it was me, that probably would have been the first thing I would do. But, like I say, I'm not gonna judge it, and I don't wanna get into being on one side or the other.

"You can look at it two or three different ways, and I kind of see all the angles. It's just very unfortunate. And it's kind of sad — it's really kind of sad…

On May 10, messages and video footage involving Ellefson were posted on Twitter. The longtime MEGADETH member later released a statement on Instagram denying all social media chatter that he "groomed" an underage fan.

On May 24, Mustaine — who formed MEGADETH with Ellefson in 1983 — announced the bassist's departure from the band, saying, "We do not take this decision lightly. While we do not know every detail of what occurred, with an already strained relationship, what has already been revealed now is enough to make working together impossible moving forward," Mustaine wrote. Two days later, Ellefson released a follow-up statement in which he vowed to file a "defamation lawsuit" against the person who "illegally posted a very private video" of the bassist and made "false allegations" against him. He also said he was working with the police in Scottsdale, Arizona "in their investigation into charges regarding revenge pornography to be filed against the person who posted the video. This person will be prosecuted to the fullest extent of the law," Ellefson wrote. He went on to say that he was "taking this time to be with my family" and wished his "bandmates" the best with their upcoming tour.

David, who became a Lutheran pastor nearly a decade ago, and his wife Julie Ellefson have been married for 27 years. They reportedly dated for six years after getting together in 1988. After two days of engagement, they married on April 2, 1994. They have two children, Roman Alexander (25) and Athena Grace (22).

Ellefson, who has lived in Scottsdale, Arizona since 1994, is also an author and entrepreneur, holding the reins of EMP Label Group, Combat Records, Ellefson Coffee Co., and more, in addition to a diverse portfolio of brands and signature products. Ellefson was also inducted into the 2018 class of the Iowa Rock N' Roll Hall Of Fame, just over the border from Jackson in Spirit Lake, Iowa.