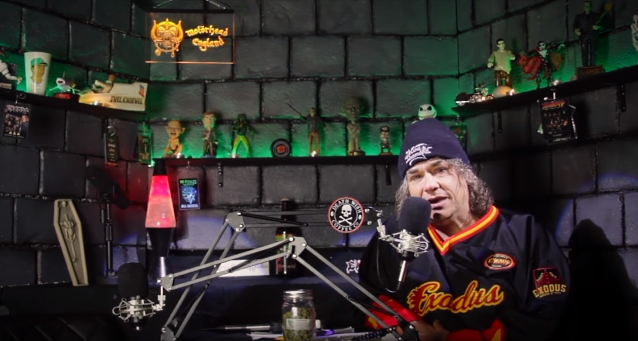 EXODUS frontman Steve "Zetro" Souza has launched a new YouTube channel, Zetro's Toxic Vault, where he has begun posting videos of him talking about whatever is on his mind, including tales and stories from his 30-plus-year career as on-and-off singer for one of thrash metal's most influential acts.

In his video review of MÖTLEY CRÜE's recently released biopic "The Dirt", Souza said: "I like this movie. [It's] one of my favorite rock and roll movies about autobiographies that I've seen. I liked [the QUEEN biopic] 'Bohemian Rhapsody', but I think I like this one a bit better. I like the way the characters played on the camera, after maybe saying one of their lines and telling a story to the camera as if it did or it didn't happen that way. I felt that it was a bit jumpy through the timeline, but you can' tell 30 years of history in an hour-and-48-minute movie. I though the actors did great. They played great roles on each one of them. And I was riveted through the whole thing. Even though being in the business at that time, I was aware of a lot of those things that went on that maybe people didn't necessarily know about, but because I was in the business, I was privy to that information."

Souza recently confirmed that fans will have to wait until at least the end of 2019 or early 2020 before EXODUS's follow-up to 2014's "Blood In Blood Out" album. Although it was originally reported that the veteran San Francisco Bay Area thrashers would go into the studio in October 2017 to begin recording the new effort, it now appears that the band will not start work on the next disc until guitarist Gary Holt is done playing with SLAYER as part of that group's final tour.