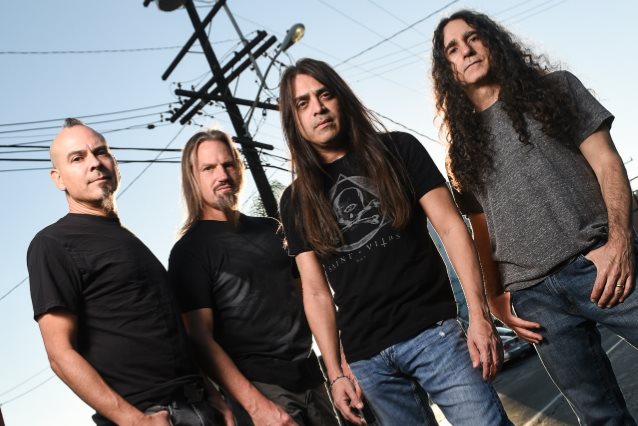 Performed by the FATES WARNING lineup that returned to form with 2013's acclaimed "Darkness In A Different Light" release, "Theories Of Flight" was produced by guitarist Jim Matheos and mixed/mastered by Jens Bogren at Fascination Street Studios (OPETH, SYMPHONY X).

The official lyric video for the track "From The Rooftops", taken from "Theories Of Flight", can be seen below.

FATES WARNING vocalist Ray Alder commented: "This song is opening track on 'Theories'. The lyrics in this song are about life, and how we only have one, we need to live it to the fullest. We can't hide from things we fear, we have to live, to take advantage of what little time we have here. Take chances, make changes and leave your mark on this world..."

He added about the album: "We began writing the music for 'Theories' while we were still touring for [2013's] 'Darkness In A Different Light'…

"I believe that the anticipation to write another record was due to the fact that we were once again touring and playing new material after nine years of playing the same songs.

"It was exciting to be on stage again and we looked forward to getting back in the studio. I also believe that our fans were happy to finally having something new to listen to.

"I/we are very happy with the way that 'Theories' turned out. Jim [Matheos, guitar] and I collaborated practically every day on the new album for over a year until we actually went into the studio. There were many different versions of the songs until they were finally complete, and I believe it shows in the final product.

"I think that Jim did an excellent job producing the new album. The material is, I believe heavier than what people are used to from us, as well as my vocal style. We wanted something different than 'Darkness' but something that still carried a lot of melody."

FATES WARNING guitarist and main composer Jim Matheos had this to say about the title and the artwork for the "Theories Of Flight" album: “The working title for the album was 'The Ghosts Of Home' and the song with that name was first called 'Home Again'. When I started searching for artwork, I came across the piece that's now the cover and it was called 'Theories Of Flight'. In fact, the title you see on the cover is part of the original art, not something we added. There's a loose theme running through a lot of the lyrics, and this developed organically and separately, where Ray [Alder, vocals] and I are often writing about various uprooting, escapes….flights. So I was immediately drawn to that phrase as being a better description of what some of the songs are about."

Guitarist Frank Aresti contributed a couple solos on the new record, but due to his current work commitments, he will not be able to tour with FATES WARNING for the foreseeable future. Matheos stated; "[Frank] remains part of the extended FATES WARNING family and the door is always open for him to return anytime his schedule permits."

Added Frank: "I absolutely love 'Theories Of Flight', and I'm proud to be a part of it. I'll continue to do as much as I can, as often as I can, with the band. Meantime, they're in good hands with Mike Abdow, a great guitarist and a great guy. I wish them the best of luck, and look forward to sitting in on a song (or two)."